Up to 1,000 jobs saved after insurer agrees to cover centres 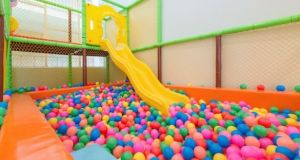 Linda Murray, who leads Play Activity and Leisure Ireland, said that 61 play centres had been facing closure as no insurer was willing to offer them a premium in Ireland. Photograph: iStock

Up to 1,000 jobs have been saved after a group of play centres banded together to get insurance from a British provider, the group representing the sector has said.

Linda Murray, who leads Play Activity and Leisure Ireland (PALI), said that 61 play centres had been facing closure as no insurer was willing to offer them a premium in Ireland. She blamed the high level of payouts and the prevalence of bogus claims for the sector’s difficulties.

However, after the group came together, an insurance broker managed to convince a UK provider to write policies for all of them.

“We presented ourselves as a group and approached five in Ireland and fifteen in the UK and two of the insurance companies in the UK agreed to underwrite us,” Ms Murray said.

Glennons Insurance brokerage worked on the deal on behalf of the group, she said. “Not only did I manage to get insurance for my little play centre in Navan, but I managed to get it for another 60 play centres.”

However, the prospect of closure remains a real threat for many in the sector due to the rapid increases in the cost of cover.

She said that the experience had hardened her resolve to secure reforms in the insurance sector. In addition to her role with PALI, Ms Murray is also a director of the Alliance for Insurance Reform. “It is a huge relief, but it has made me more angry that none of this was with any help from our own government,” she said. “It’s made me even more determined to fight, otherwise we will be in the same position in a couple of years time.”

She said that nine play centres closed their doors in a recent four month period after being unable to get insured.

Ms Murray said that Junior Finance Minister Michael D’Arcy, who is responsible for the insurance sector, is “sympathetic and trying his best, but I think he’s not getting support from his colleagues.”

Insurance reform advocates have called for the introduction of a specialist Garda fraud unit, the reform of the book of quantum, and the progression of the Judicial Council Bill, which, if passed, would allow judges recommend guidelines for injury payouts.

Ms Murray said these reforms would bring premiums down, and make bogus claims less likely. “I think [fraudulent claims] are dangerous in our culture, they are dangerous for businesses. It’s only one per cent who do it, but it just takes one or two,” she said, adding that her sector was highly profitable for insurers.

Play centres have paid €5 million in premium payments in the last five years, but only €200,000 has been paid out in claims, she said. However, insurers were still being driven away by the risk of large compensation claims.