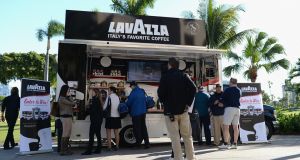 Lavazza is facing a challenge on its home turf from US giant Starbucks.

Lavazza, Italy’s best-selling coffee brand, has a warning for Starbucks as the coffee and frappuccino group enters the Italian market for the first time: you have much to learn.

The step marks the latest skirmish in the fast-consolidating $80 billion global coffee industry, pitting the US chain against Italy’s family-owned purveyors of small cups of rich espresso and frothy cappuccino.

“I don’t want to be arrogant in what I say, but it is evident they are coming to a culture of coffee and I am talking about coffee, not strawberry frappuccino,” says Antonio Baravalle – a former Fiat executive and protégé of the carmaker’s chief Sergio Marchionne – who has been chief executive of family-owned Lavazza since 2011.

“I see it as a positive thing. They are going to have to work to raise the quality of their coffee [to sell it to Italians] and then they can export that back to the world, which will open the way for us.”

Rapid consolidation is transforming the global coffee industry from its roast and ground leaders, such as Lavazza – the world’s sixth-largest roaster by sales - to retailers such as Starbucks, which operates in 70 countries.

Mondelez International of the US and Netherlands-based DE Master Blenders 1753 agreed a merger more than a year ago, posing a threat to market leader Nestlé and triggering a rush among rival companies to reconsider strategies.

Illycaffè, Lavazza’s much smaller Italian rival, in August last year sold a €70 million bond to Pricoa Capital with the option to increase it to €140 million, and has since started to roll out its own-branded coffee bars.

Massimo Zanetti, which owns the Segafredo Zanetti espresso brand, listed a third of the company on the Milan stock exchange last May.

The response from Lavazza, Italy’s largest coffee roaster with nearly half of the local market and retail sales almost four times the size of Illycaffè’s, has been to adapt. It is seeking to transform itself from a predominantly Italian company into a global brand able to compete with Nestlé and JAB Coffee Holding, the closely-held investment firm backed by Austria’s billionaire Reimann family, which in December agreed a $14 billion deal to acquire Keurig Green Mountain.

In the past year Lavazza shareholders have put up €1 billion in additional capital to allow the 121-year-old company to buy Carte Noire, France’s number-one coffee retail brand by sales, and Merrild, a Danish coffee roaster, from DE Master Blenders 1753. It bought back its distribution in Australia and nearly doubled sales and marketing expenditure.

You either sell up or you grow. There is no alternative

Turin-based Lavazza, which is distributed in 90 countries but makes about half of its revenues in Italy, funded the expansion by taking bank credit lines for the first time in its history and selling its 3 per cent stake in Keurig, just before the JAB swoop.

“We want to be independent. To do it on our own,” says Mr Baravalle, who also rules out a stock market listing soon. “It’s a necessary choice. You either sell up or you grow. There is no alternative.”

Lavazza’s takeover of Carte Noire will create a group with combined revenues of €1.7 billion – Lavazza made €1.4 billion sales in 2015, 8 per cent higher year on year at constant currencies.

“It is a perfect symbiosis,” says Mr Baravalle, who expects group sales to be €2 billion within the next five years, and does not rule out making further acquisitions of local coffee roaster “jewels” from 2017 onwards.

Bankers and company executives say JAB, among other buyers including private equity, approached the three big Italian groups but all refused, wanting to preserve their familial independence.

Still, some analysts are sceptical that Italy’s homegrown coffee companies have the financial firepower to compete with multinational consumer goods groups with billions of dollars to spend on brand and innovation.

For instance, trends suggest that the costly-to-develop coffee capsule market, where Nestlé, which owns the Nespresso brand, and Keurig lead the pack, will ultimately overtake traditional roast and ground.

Mr Baravalle admits Italian groups have lagged behind but says that Lavazza, which last year put the first coffee machine into space, can “leapfrog” competitors.

Today the company spends the equivalent of 2.5 per cent of its revenues on research and development, three times more than it did five years ago.

“Italy’s family capitalism has more courage and understanding [about the requirements of competing globally] than in the past,” he says.

1 Citigroup warns that markets are out of step with reality
2 Should my mam wait for house prices to drop before buying?
3 US ‘hard seltzer’ drink White Claw launches in Ireland
4 Chris Johns: Past is another country when it comes to our post-pandemic future
5 ‘I’m so lucky to be in the Caribbean – a million miles from Derry Girls’
6 Donohoe told insurers they risked ‘irreparable damage’ to reputation
7 Ryanair expects air fares to fall when flights take off again
8 Joint accounts: if one of us dies, can the other access the money?
9 If you injure yourself working from home, is your employer responsible?
10 ‘The recovery needs to be a full-scale economic renewal’
Real news has value SUBSCRIBE