Fidget spinner craze turns the toy industry on its head 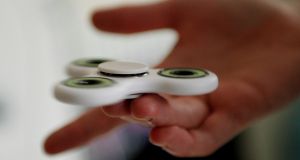 Fidget spinners are wholesaling from Chinese factories for as little as 50 US cent. Photograph: Reuters

The 26-year-old’s salvation came in the form of a decades-old spinning propeller toy. In October his wife, a special education teacher, asked him to order “fidget” gadgets for her class. Noticing that similar toys, designed to relieve stress, were all across YouTube, he decided to try his luck selling them on Amazon. Now he sells 500 to 1,000 spinners a day for $17.95 a pop.

“As soon as I got them in stock they were selling like crazy,” Mr Weaver says. “Literally the whole debt has been paid off now...it was really cool because we love Jesus.”

Mr Weaver is one of the earlier enterprising adults to take notice of a viral craze that has shaken the $90 billion global toy industry. When he first listed fidget spinners in December under the company EWR Products, there were only one or two other sellers on Amazon.

Four months later Walmart, the world’s largest retailer, is scrambling to air freight spinners directly from Chinese factories to get them into stores faster, while street retailers in Ireland and elsewhere take advantage of shortages of the official product.

In terms of customer inquiries, the fidget spinners are “the biggest craze” for any product Walmart has seen in the past five years, says Michelle Malashock, a spokeswoman. The company is circumventing its distribution centres, to quickly replenish stock across its 3,500 supercentres.

Unlike previous consumer fads, the fidget spinners craze sprang up in the bowels of the internet. The earliest version emerged in 1997 from Catherine Hettinger, an engineer, who let the patent expire on her invention in 2005. After more than a decade-long lull, newer versions of fidget spinners were recently revived into relevance among schoolchildren on YouTube and Instagram, yielding a cottage industry of anonymous individuals and small toy manufacturers that shipped the gadgets from Chinese factories to American corner stores and gas stations.

“It’s the wild west,” says Josh Loerzel, vice president of marketing at Zing, a toy manufacturer that ships to Walmart and Toys R Us. “The biggest toy I’ve seen in at least 10 years, and it’s been a total free-for-all. It’s not a big-bucks driven, premeditated thing. It blew up the opposite way.”

It is difficult to gauge the size of the market for fidget spinners. NPD, a data group, does not have figures yet because large corporations such as Walmart and Target only in the past few weeks have begun selling them, and most sales have taken place across a fragmented, murkier marketplace. The big retailers do not disclose individual product sales, although one said it was selling 100,000 spinners a week. Zing expects to ship 4 or 5 million fidget spinners this year.

Observers say the buzz surrounding fidget spinners underscores how much the toy industry, and more broadly the world of retail, has changed. Toy industry sales have been growing at a rate of about 3 per cent a year since 2011, although toymakers have been hurt by the ever-shorter life cycles of products - mirroring the rise of the fast fashion sold by H&M and Zara - and the emergence of Amazon as the premier destination for online shopping.

“This really proves the ability for smaller players to have a big financial impact, through Amazon,” says Matt Quint, a marketing professor at Columbia Business School. “It shows the power of platforms like Amazon and YouTube. When there’s consumer demand it doesn’t really matter who the suppliers are.”

With spinners wholesaling for $0.50 to $1.50 from Chinese factories, and no patents or licensing fees to be paid, “the margins are astronomical”, says Chris Byrne, a 30-year toy veteran and editor of Toys, Tots, Pets & More, a trade publication. “Right now the toy industry is in full reactive mode because they don’t want to miss out on those sales. They don’t want to cede ground to Amazon.”

While storied brands such as Star Wars have held their cache in the toy market, newer ones such as Frozen and Finding Dory have a much shorter shelf life, and internet fads such as fidget spinners present an even larger challenge.

“The big giants [Hasbro and Mattel] typically take up 90 to 95 per cent of the business and everyone else is left scrapping. This has flipped the script...it’s about how quickly you can react.” Mr Loerzel says that during recent meetings with Walmart management in Hong Kong, “all anyone was talking about was spinners”, even though the companies were there to plan products for Spring of 2018.

“Things take a while to get to every Walmart, and toys usually have a longer lead time,” says Ms Malashock. “We’re already planning [the autumn season] at this point. But when these things come up, it’s about going through suppliers to jump on it quickly.”

Manufacturers said that the vast majority of supply was coming from Chinese factories, which already produce about two-thirds of the output for industry leaders such as Hasbro and Mattel. Chinese manufacturers that traditionally make smartphone accessories have also jumped on the trend. 7-11 said it sources the spinners from “several suppliers” but declined to comment on which countries they came from. Toys R Us said it ships them by air from China.

“In our modern age, an internet meme can become a manufacturing meme,” says Mr Quint. “There’s no famous brand pushing this. This is for a generation that grew up on YouTube. The whole thing is sort of a mystery...it’s a real lesson for retailers and manufacturers.”

1 EU divisions laid bare by ‘frugal four’ Covid recovery proposal
2 Schrems calls on EU authorities to intervene in ‘Kafkaesque’ DPC case
3 Player Wills site: Hines and APG to seek permission for 416 homes
4 Pricewatch: Coronavirus has given us four categories of shopper
5 Volkswagen agrees to compensate German motorists
6 Eir sells mobile mast infrastructure company for €300m
7 Economies can be restarted if bold and imaginative choices are made
8 Will remote working mean an end for the corporate HQ?
9 Bayer reaches agreement in 125,000 US cancer lawsuits
10 Pilita Clark: A lot of us are losing it in lockdown – but we really shouldn’t
Real news has value SUBSCRIBE