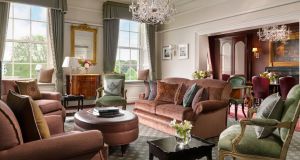 Abbey Upholsterers recently worked on the refurbishment of the Shelbourne Hotel in Dublin.

Abbey Upholsterers has helped to fit out some of the big names in the hotel industry, but it’s a company that was born out of necessity more than anything else.Finance director George Devlin said his grandfather, George Devlin snr, was working in a Whiteabbey, Co Antrim linen mill in the early 1900s when he was made redundant. His solution? Buy a roll of lino and go door to door selling it.

“At the time, people didn’t have much money, so he used to go round and collect it every week,” says Devlin. Eventually, George snr’s customers started asking for furniture and upholstery. Abbey Upholsterers was born.

The company now works on hotels, bars and restaurants, as well as private homes. Fluidity is the key for the business.

“When the recession hits, the hotels don’t want to do anything, so we have to focus on whatever areas are moving,” Devlin says.

The company focuses on making bespoke products, whether that’s joinery, upholstery or something the client needs fitted into their home.

“It’s a tricky business to operate and run because we do so many different things,” he says. “We could be making one style of chair and making 10 of them, and the next person could be running a batch of chairs. There’s a lot of one-offs here; it’s not a production line as such.

“Every single order is different and will have different specifications – colours, sizes, everything – so you do have to be involved and see it right through.”

Devlin is one of three brothers who manage Abbey Upholsterers. His brother Paul is the managing director, and another brother, Desmond, manages projects on site.

“I could have 50 job titles in a single day. That’s what you have to do when it’s your business: you have to work at so many different levels with staff, clients, at board meetings.”

At one point, the brothers were trying to run their Whiteabbey facility 24 hours a day to cope with the demands of the business.

“It was difficult from a family point of view. We obviously physically couldn’t work 24 hours a day and we were finding we couldn’t give over the control to somebody else. Production at night wasn’t sufficient and it was getting too much for everybody.

“We decided to cut the hours and move to bigger premises.”

Abbey Upholsterers employs about 110 staff at those premises in Carrickfergus, where they moved 10 years ago.

“We were getting busier and we needed proper loading bays. At that point, we were doing a lot of work for interior designers. We had also boosted our joinery side of things and we were making a lot of wood mouldings and skirting boards, using big timber manufacturers like JP Corry.”

All the employees in Abbey Upholsterers are highly skilled, Devlin says. “Someone who can hang a door is no good to us: we need someone who can build furniture from plans. We’ve also got upholsterers and bench polishers, people like sewers and cutters as well.

“It’s very difficult to recruit staff with the talent we require. We advertise in many different mediums but our workforce is increasingly from Poland, Romania, Lithuania, ” he said.

One of the directors’ biggest concerns is what obstacles the business will face as Brexit approaches.

“The fluctuation in currency is the big problem. With price increases, you’re trying to remain competitive, and we’re also cautious about being able to sustain the staffing needs of the business,” he said.

The hotel industry is booming in Belfast, says Devlin, but many of the developers are competing with a growing market for student accommodation.

“There is a lot of investment, but it’s not high-end investment. For that reason, we’re focusing a lot on our markets in London and in southern Ireland. Hotels are growing again, but at a more controlled rate than before.

“We recently finished the Shelbourne Hotel. We also worked on the Alex Hotel and the Davenport,” says Devlin.

“We only started working in London about 10 years ago, and a lot of that has grown from other businesses in the area seeing what we’ve done and seeing our branded vehicle being there quite often.”

Devlin says it’s not possible to look too far ahead. “We try and keep an eye on what’s going to happen in three or four years, but we mostly focus on keeping our orders topped up. The three- to six-month period is what we focus on.”