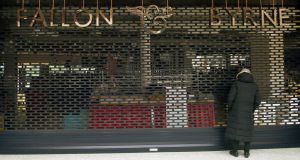 Fallon & Byrne confirmed on Thursday that it had decided to shutter its 10,000sq ft food hall and restaurant in the Swan Centre in Rathmines “with immediate effect”. Photograph: Aidan Crawley

The high-profile food retailer and restaurateur Fallon & Byrne has decided to shut down its biggest outlet in Dublin, highlighting the growing competitive intensity within the capital’s burgeoning restaurant scene.

The company confirmed on Thursday that it had decided to shutter its 10,000sq ft (929sq m) food hall and restaurant in the Swan Centre in Rathmines “with immediate effect”. It said the outlet, which opened less than three years ago, was loss-making and the company had chosen to act “decisively” now to protect the rest of the business.

Fallon & Byrne, controlled by developer Paul Byrne and former Sunday Times Ireland editor Fiona McHugh, will continue to trade from its flagship food and retail outlet in the city centre at Exchequer Street and also in Dún Laoghaire.

The company said both its remaining ventures “have a history of trading profitably”. Including the closing Rathmines outlet, Fallon & Byrne had sales approaching €15 million annually and 350 staff.

It is not possible to ascertain the full extent of the Rathmines outlet’s losses, as its operating company hasn’t filed accounts covering any period since July 2017, when it was already €143,000 in the red.

It is understood from various sources that the decision to close the large Rathmines venue came as a major shock to suppliers and to staff. On New Year’s Day, an email was sent to staff calling them in for a meeting on Thursday morning. At the meeting, they were told the outlet was shutting immediately.

Some staff who had not yet checked their emails and were unaware of the meeting are believed to have discovered their employer was closing through subsequent social media posts from the company.

Paul Anderson, a scion of the cinema-owning Anderson family, which owns the Swan Centre and is Fallon & Byrne’s landlord, declined to comment on the closure on Thursday. Ms McHugh was unavailable for comment.

Fallon & Byrne, which was founded in 2006 themed around a New York-style deli-food experience, has had a mercurial journey since. Its original outlet, located in an old Telecom Éireann exchange near Grafton Street, has evolved into one of the best-known eateries in the city, thronged with tourists and locals. Its success prompted Fallon & Byrne to expand into Rathmines and Dún Laoghaire.

The group had a near-death experience about eight years ago, however, when it entered examinership after it was unable to pay a €1.4 million tax bill. It emerged from the process after raising fresh capital.

The decision to shut down its Rathmines outlet appears all the more surprising given the fact that Fallon & Byrne engaged Goodbody stockbrokers earlier this year to help it seek fresh capital for expansion.

Sources at the time suggested the group was looking to double in size over five years. It has plans for a new outlet at Connolly Station and it may also consider launching smaller retail outlets.

It also has advanced plans for a major extension to its Exchequer Street outlet, where it recently signed a new 25-year lease with Eir. The project is currently the subject of a planning objection from a nearby business.

Ms McHugh and Mr Byrne recently opened another restaurant in Rathmines, Lenehans Bar and Grill, around the corner from the Fallon & Byrne outlet. It is completely unaffected by the closure, and sits outside of the Fallon & Byrne group structure. Their business partner in Lenehans is Cantor Fitzgerald bond trader Peter Costigan.