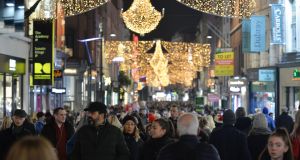 Grafton Street on December 21st, 2019: Consumers were due to spend about €2,800 per household over the Christmas period. Photograph: Artur Widak/NurPhoto

The threat of a no-deal Brexit hung like a dark cloud over the Irish retail industry for much of 2019, weighing on confidence. The threat of a disorderly crashout may yet return in 12 months’ time if the UK’s trade talks with Brussels hit the buffers.

But, currently, a sense of respite reigns and it appears that Irish shoppers have been in the mood to let loose. According to Ibec industry group Retail Ireland, consumers were due to splash out more than €4.9 billion over the Christmas period, or about €2,800 per household, up 3.4 per cent.

The trade group’s most recent quarterly data also shows that for the three months to the end of September, Irish retail sales were up 5.1 per cent in volume, although just 2.3 per cent in value. The data suggests Irish shoppers were prepared to set aside Brexit fears and come out to play, but only if they were tempted with deep discounts.

On the shopfloor, 2019 was a busy year for many Irish retailers at home and abroad. Irish-born retailers assumed some of the biggest jobs in the UK industry. At home, cut-throat competition in the estimated €12 billion grocery sector continued apace, as supermarkets fought for respective slices of the sector’s growth, which averaged between 2 and 3 per cent each month.

Dunnes Stores finished the year as the State’s largest grocery supermarket player. It holds a 22.8 per cent share of the market, growing strongly outside Dublin in 2019. It continued the upscale metamorphosis of its food offering. Anne Heffernan, daughter of company matriarch Margaret Heffernan, now oversees its charge into the epicurean sector.

It can’t match the growth rates of the two German discounters, however. Aldi was the fastest-growing supermarket over 2019, growing at 7.9 per cent in the most recent industry figures from Kantar Worldpanel. Lidl, meanwhile, is growing at close to 6 per cent and has just invested €100 million in a new logistics centre in Kildare.

The big news this year at SuperValu owner Musgrave concerned the departure of long-serving chief executive Chris Martin, who formally retires at the end of the month after 14 years in the role. His successor, Musgrave’s wholesale boss Noel Keeley, is due to formally take the reins on New Year’s Day.

In the market share stakes, Tesco slipped slightly further behind number two player SuperValu. But Irish executives made their mark on the group in the UK. Cork accountant Ken Murphy has been lined up to take over as chief executive of the overall parent group next summer. Another Irish executive, Christine Heffernan, was also appointed to the group’s top communications role in the UK in February.

In the convenience sector, the management of Spar-owner BWG, who had owned 20 per cent of the business, sold half of this to the South African The Spar Group that was already its majority share owner. BWG chief executive Leo Crawford, finance director John O’Donnell and property director John Clohisey were due to share a cash payout in December of about €41.5 million for the 10 per cent stake, making it a very happy Christmas for them indeed.

In department stores, there were nerves at the Irish operation of Debenhams in April, after its UK parent was taken over by its lenders in a move that wiped out investor Mike Ashley. Staff at its 11 Irish stores were able to breathe a sigh of relief, however, with the Irish operation ultimately unaffected by the UK administration.

On the foreign front, with the withdrawal of Dunnes Stores from the UK, toy group Smyths is now by far the most successful Irish retailer operating beyond its home shores. After acquiring the central European operations of Toys R Us more than 18 months ago, in 2019 it set about expanding the operation in Germany.

This year, Smyths invested €40 million in a new logistics facility between Bremen and Hamburg. The Irish group also opened a new toy superstore in Munich, its first new build in Germany, taking its total number of stores there to 66.

The boon in online shopping this year benefited An Post more than any Irish retailer, with local online shoppers often ordering from UK sites to take advantage of the relative weakness of sterling.

One prominent Irish retail executive did make his mark on the online scene in 2019, however. Offaly man John Lyttle, who was previously chief operating officer of Irish fast-fashion chain Penneys/Primark, took over as chief executive of listed online fashion retailer BooHoo. He stands to make £50 million in share awards if he hits growth targets over the next five years.

Looking ahead to 2020, the Irish debut of French sporting goods mega-retailer Decathlon is scheduled for April, which will shake up that particular segment of the market. It is investing €13 million in its first store here, which will be in Ballymun, Dublin. It has signalled that it may also open further outlets around the country, providing a headache for existing operators such as Lifestyle Sports and Mike Ashley’s Sports Direct.