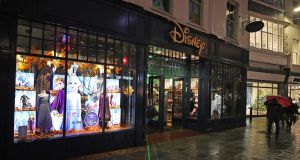 Documents filed by consultants acting for the Disney Store claimed homeless people sheltering in its doorway was an ‘improper use’ of the area. Photograph: Nick Bradshaw

The Disney shop on Dublin’s Grafton Street is struggling to get approval for its controversial planning application to install security measures to prevent homeless people from sleeping in its doorway.

Dublin City Council has sought further information from the US entertainment giant about its plans for a sliding, open-mesh retractable security gate to the shop entrance.

Planners with the local authority said they had a concern about the materials being proposed by Disney as it was important the security gate would not detract from the streetscape.

They pointed out that the Disney store is located in the Grafton Street Architectural Conservation Area (ACA), and is covered by a scheme of special planning controls which means the use of high-quality materials was “crucial”.

Disney has now been asked to address these concerns before a decision on its application for planning permission for the security gate is made.

The council said it had a policy which required a high quality of design and finish for new and replacement shopfronts, signage and advertising.

It said shopfronts are one of the most important elements in defining the character, quality and image of streets in both the city centre and urban villages.

The Grafton Street ACA policy states that the use of externally fitted roller shutters is not permitted and, when used behind a window display, should be comprised of a fine-density open mesh.

The scheme of special planning control for the Grafton Street area states that in choosing a security system, retailers must strike a balance between securing their premises and keeping the area attractive, particularly after normal shopping hours when window shopping can play an important role in generating night-time pedestrian activity.

Documents filed by consultants acting for the Disney Store claimed homeless people sheltering in its doorway was an “improper use” of the area.

“Staff members of the Disney Store have observed the recessed doorway as being used by the homeless for sleeping, alongside apparent drug use being reported,” they said.

CBRE also claimed gardaí had been contacted on multiple occasions to deal with incidents at the shop entrance, where staff had been exposed to threatening behaviour and confrontation.

While the council has acknowledged the need for security at the Disney store in response to what the company described as anti-social behaviour, it said it was important that any proposal did not detract from the streetscape.

An architect, Enda Fanning, also criticised the proposed security measure claiming they were of a “low-grade, industrial design of an unknown material and not in keeping with the Grafton Street area”.

Mr Fanning claimed industrial, retractable security gates were being used to get around the restrictions on the use of roller shutters.

“They are aesthetically damaging to a shopfront and streetscape and the council should refuse such planning applications,” he said.

The architect said he objected to Disney’s claims about homeless people to justify the need for a security gate as he claimed it gave “a false impression” that there was constant misuse of the shop entrance.

Mr Fanning, who said he worked in a voluntary role with homeless people, said inconvenience for shop owners could be caused occasionally at opening time when a homeless sleeper might need to be moved on.

“For many thousands such recessed doorways across the city and country are the only hope of a bed for the night,” he added.

Mr Fanning said the proposal for the security gates represented “a gross over reaction” to the current situation.

He added: “For a company such as Disney to use a planning application to simply ‘move on’ a problematic issue rather than making an effort to engage on the issue with those working in the area of homelessness is unfair and unhelpful to the overall problem. It is of no assistance to the local community.”