Shares in retailer Next plummet as it cuts profit guidance 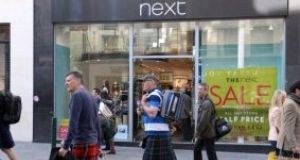 Next has set out its expectations for the 2017-2018 year, predicting a pretax profit range of £680-£780 million, below analysts’ average forecast.

Next cut its profit forecast for the current financial year after a poor Christmas and warned of a further decline in 2017-2018, sending shockwaves through Britain’s clothing sector as the most successful performer of the last decade faltered. The company, which trades from about 540 shops in Britain and Ireland, said it was disappointed with its Christmas sales and highlighted “exceptional” levels of uncertainty in the sector, adding it was preparing for tougher times.

Next, which has said repeatedly that British people are spending less on clothes, warned that its 2017-2018 pretax profit could come in a full £100 million (€118 million) below market forecasts, wiping more than 14 per cent off a share price that had already slumped by one-third in 2016.

Next was the first major British retailer to report on Christmas trading and its statement stoked concerns about lower customer numbers on high streets as shoppers increasingly shift to buying online. Shares in Next’s retail rivals also suffered. Marks & Spencer, Primark owner AB Foods and Debenhams fell by 4.2 per cent, 3.6 per cent and 5.5 per cent respectively.

Next chief executive Simon Wolfson believes people in Britain are spending less on clothes and instead using spare cash on holidays, eating out and events. He is also anticipating pressure on spending as inflation rises.

The chain did not break out its Irish performance.

“Not only do we face a continuing cyclical downturn in clothing but, over and above that, we’ve got price increases and a squeeze on real earnings,” Mr Wolfson said.

“So it makes sense to be conservative . . . I don’t think we’re being overly gloomy,” added Mr Wolfson, who is a Conservative Party member of Britain’s upper house of parliament and a supporter of Brexit.

Chief executive since 2001, Mr Wolfson said he remained committed to the business. Following the plunge in sterling after last June’s Brexit vote, he expects Next’s prices to rise by up to 5 per cent. Given this tough backdrop, the company, which also has franchised stores overseas and the Directory online and catalogue business, forecast that full-price sales could fall by up to 4.5 per cent in 2017-2018.

Next is also facing rising costs, notably a national minimum wage, higher business rates, an apprenticeship levy and higher energy taxes. Analysts are also concerned about a declining number of Directory credit customers and the erosion of Next’s position online as rivals step up investment.

In the run-up to Christmas, full-price sales at stores fell 3.5 per cent, while Next Directory sales were up by 5.1 per cent, raising questions about the merits of opening more stores.

1 Airbus poised for deal with regulators to settle corruption probes
2 Abtran challenges award of €63m contract by Irish Water to rival company
3 Irish-founded ‘kid tech’ company SuperAwesome gets Microsoft backing
4 US threatens retaliation against EU over proposed carbon tax
5 Money matters: ‘My father embarrassed us with his haggling’
6 Are there annual limits on inheritances or gifts to a child?
7 Little strategic thinking in election manifestos of Fine Gael and Fianna Fáil
8 Pilita Clark: When a rude boss keeps you waiting, why not walk out?
9 High costs and low returns will fuel nursing home shortage - CBRE
10 US markets have worst day in three months on concerns over coronavirus
Real news has value SUBSCRIBE