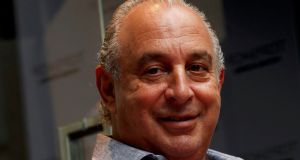 Philip Green: One Labour MP wants parliament to bring in a “nuclear deterrent” to prevent the likes of Green from walking away from his pension responsibilities. Photograph: Reuters/Bobby Yip

Sir Philip Green decided it was time for a change this year. Instead of ringing in 2017 at the exclusive Sandy Lane hotel in Barbados, where he has spent the festive season for the past two decades, the disgraced retail tycoon and his family opted for Miami instead.

Still, the more discreet but equally luxurious location, La Gorce island (fellow retail billionaire Mike Ashley once owned a $45 million holiday home there) failed to save the former BHS owner from the attention of the paparazzi.

Green was pictured with his wife Tina driving around in a Bentley convertible supercar and enjoying a game of tennis, brandishing a racket encased in a £321 Louis Vuitton leather cover. In 2017, life still looks pretty good for the ex-tycoon.

Back in Britain, however, many former BHS employees have been forced to rely on handouts to make end meet. Just days before Christmas, a charity once chaired by Charles Dickens revealed it had been overwhelmed by calls for help from those who lost their jobs when BHS collapsed in April.

The Fashion and Textiles Children’s Trust, founded in 1853 by philanthropic textile merchants, said claims had soared to a record 460 in the past six months – up from 150 the previous year – and that some 275 of them were from former BHS workers. The average size of the grant was £150 (€176).

It is now more than six months since the yacht-owing billionaire promised MPs that he would resolve the £571 million pension deficit at BHS. “We will sort it,” he told the work and pensions committee during a six-hour evidence session in June. “We will find a solution.”

Since then the silence has been deafening. Some of the 11,000 former BHS employees have found new jobs. But many face a bleak new year, as do the group’s pensioners.

Of the 20,000 BHS scheme members, some 1,600 have already suffered a 10 per cent cut in their monthly payments as a consequence of its transfer to the Pension Protection Fund, the pensions “lifeboat” that picks up the pieces when a company collapses.

Time is running out for Green to make good his promise. The pensions regulator, which is understood to have calculated the amount Green should pay into the pension scheme at some £350 million, has already begun enforcement action against Green and Dominic Chappell, the thrice-bankrupt businessman he sold BHS to for just £1 a year before its inevitable collapse.

MPs have become increasingly angered over Green’s lack of action.

Labour MP Frank Field, chair of the work and pensions committee, is determined to make the billionaire pay up to plug the pension gap. He wants the government to bring in what he calls “a nuclear deterrent” to prevent companies or individuals walking away from their pension scheme responsibilities.

His proposal is that the pensions regulator should be able to impose a fine three times higher than the amount it judges is owed to a scheme. In the case of BHS, that would mean a bill of £1 billion – which would make a significant dent even in the Green family’s multibillion-pound fortune.

That fortune is likely to take a bit of a hit in March, when Sir Philip turns 65. He is renowned for his lavish birthday bashes: his infamous “toga party” in Cyprus 15 years ago, where guests were serenaded by Rod Stewart, cost an estimated £5 million.

His 60th in Mexico was reckoned to have cost even more, with music by Stevie Wonder, Robbie Williams and The Beach Boys, and guests including Leonardo DiCaprio, Naomi Campbell and Ronnie Wood.

Green is clearly not allowing the BHS scandal to get in the way of his lavish lifestyle, although it’s a fair bet there won’t be quite so many famous guests in attendance this year after the torrent of negative publicity.

Nor is the tycoon holding back on his business ambitions. Late last year he revealed that his successful Topshop fashion chain is to open its first stores in mainland China, two years after establishing an online presence there.

Topshop is regarded as the jewel in the crown of Green’s retail empire, which still spans Burton, Dorothy Perkins and Miss Selfridge. Hailing the move as an important step in his “mission” to turn Topshop into a global retailer, Green said five stores will open in 2017; another 75 will follow if they prove to be a success.

At least in China, no one has heard of BHS.

1 Ireland has fifth-largest number of billionaires per capita in the world, says Oxfam
2 Companies should not use the climate crisis as a scapegoat
3 Chris Johns: Ireland risks populist culture war over property and pensions
4 Irish rents see second-highest increase in the EU since 2007
5 PTSB finance and operations executives vie for chief executive job
6 Boeing’s 737Max will fly again in 2020, Avolon predicts
7 State-backed Finance Ireland weighs stock market flotation in 2020
8 Mincon acquires Finnish company Lehti for €8m
9 Ireland ranked second in Europe for data breach notifications
10 ‘The only time I saved money was some coins in my first piggy bank’
Real news has value SUBSCRIBE