Why retail’s early giddiness has given way to caution

Sales hit by Brexit and dip in sterling. Result: ‘Nervousness’ 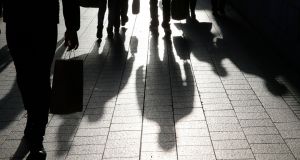 Readers who are queasy about cliches should look away now. Football is a game of two halves. And so, it appears, was the year 2016 for Irish retailers.

The beginning of the year was marked by a tangible mood of optimism. Coming off the back of Christmas 2015, the best seasonal period for Irish retailers in eight years, there was a burgeoning sense that the consumer economy was primed for lift-off.

Retail sales were growing about 6.5 per cent annually. With employment dropping, household debt falling and consumer confidence in the air, the sector’s biggest players strapped in for a fresh cycle of expansion.

Then came the June Brexit referendum. In the aftermath of the vote to leave the EU, the immediate concern was for the State’s exporting and agricultural sectors. However, figures since emerging show that retailers have been among the most clearly affected.

A weaker sterling has once again made Northern Ireland a cheaper shopping destination. Irish shoppers have also decamped online in droves, hunting bargains on the websites of UK retailers (provided they can avoid being shoehorned into more expensive, mirror Irish sites).

The latest official figures from the Central Statistics Office, to the end of October, show that retail sales fell for the third successive month. The annual sales growth rate had also fallen back to 3.8 per cent. After a slow start, Christmas will be on a par with last year, say retailers.

“The mood really changed with Brexit,” says Lynn Drumgoole, communications director at Retail Excellence Ireland, a lobby group. “From September onwards, there was a lot of nervousness. But retailers are already adjusting.”

The Amazonian flow of retail insolvencies that pockmarked the start of the postcrash era staunched in 2016. But there were still some high-profile casualties.

Movie rentals chain Xtra-vision finally gave up the ghost in January after its owner, Hilco Capital, decided it would no longer fund its losses.

The chain had been in and out of insolvency schemes over the years, but this time there was to be no sequel. Michael McAteer of Grant Thornton was appointed liquidator, with the loss of about 580 jobs.

Xtra-vision still lives as an online business operated by Hilco, which also shut its four remaining HMV stores in Ireland this year.

In May, British-owned department store chain Debenhams entered examinership, weighed by the boomtime price it paid the Roche family for its network. After a very public row with the family, who still own many of the properties, a deal was struck on its rents and all but 100 of its 1,400 direct employees were saved.

Unsecured creditors, however, suffered a 95 per cent haircut in the rescue package, highlighting once again how this class of creditors has been continually shafted to fund property-related debts in retail examinerships.

In June, UK retail billionaire Mike Ashley bought the Boyers store in Dublin for €12 million. This gave the Sports Direct and Heatons magnate what he had long wanted: a prime site in the city centre. It will reopen early in the new year.

For Ikea, Ireland was the best performing country in the network in terms of like-for-like sales growth, although it only has one store. Ikea also opened a click-and-collect store in Carrickmines in September. What it wouldn’t give for another motorway adjacent site in the southwest. Watch out 2017.

Denis O’Brien completed the sale of the Topaz forecourts network for €258 million cash plus debt. Meanwhile, Smyths, the Mayo family-owned toy retailer, continued its breakneck expansion in the UK, where it is about to open the 100th store in its Irish and British network.

In the über-competitive grocery sector, Tesco showed signs of stirring back into life, while Aldi and Lidl made further headway with their conversion to posher shopping. The latter attempted to reset its customer service standards and, along with Aldi, emphasised the improving quality of its range.

Dunnes deposed SuperValu as the biggest grocer by market share. Still, according to David Berry of Kantar Worldpanel, the crown could well shift back and forth between them in 2017: “Things are just so tight at the top.” Kantar will reveal who was Christmas No 1 in the middle of January.

Berry said the Irish grocery sector remains “probably the most competitive” in Europe.

“The growing network of stores also means that consumers all over the country now have more choice than ever. People are also buying more premium goods. We expect this to continue into 2017”.

Meanwhile, Drumgoole of Retail Excellence Ireland, said the sterling situation has eased back somewhat in recent weeks, which may take some of the pressure off Irish retailers, especially those in rural areas that have seen their local economies suffer more from sterling’s decline.

She also said Irish retailers should and will embrace more online business in 2017.

“It’s obviously a huge part of the market now. Irish retailers are moving to become more enabled for e-commerce.”