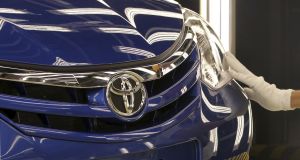 Toyota overtook its rivals to become the best-selling new car brand of 2016.

A last-minute sales surge saw Toyota overtake Hyundai to become the best-selling new car brand in 2016. It ended the year with 15,530 new car registrations, just 81 ahead of its Korean rival. Volkswagen ended the year in third place with 15,411, while Ford finished in fourth with 14,603.

The best-selling model was the Hyundai Tucson, with 7,425 registrations during the year, ahead of the Volkswagen Golf with 5,011.

Despite leading for most of the year, the Korean brand was pipped to the overall best-selling spot after Toyota recorded 258 new registrations in December, over 50 per cent of the entire new car registrations for the month. Provisional figures show this was largely made up of registrations of its new C-HR crossover, so it is likely these are going to be dealer demo models.

In the premium sector, Audi was the best-selling brand again, with 6,066 registrations, ahead of BMW with 5,513 and Mercedes-Benz with 3,791.

Across the market, the move towards lower emissions vehicles – both by the industry and buyers – is reflected in the fact that over 78 per cent of the new cars sold fall into the lowest tax band, with emissions of less than 121 g/km.

And while diesel remains the fuel of choice, representing 70 per cent of sales, there was a rise in the number of hybrids sold. Across all hybrid variations, the total was 2,868, up from 1,616 last year. In contrast the number of electric cars sold fell from 466 in 2015 to 392 last year.

The major mainstream brands ended the year better than 2015, except Citroen, down 23 per cent – and Suzuki, down 9.5 per cent. For the French brand the drop was largely down to a major shift in strategy while Suzuki was waiting for the arrival of new models, now on forecourts for 2017.

Expectations are for a strong January as the new 171 registrations arrive on our roads from Tuesday. However, overall economic uncertainty and a weak sterling rate leading to increasing imports has dampened expectations. According to several industry sources, estimates are that the market for 2017 will at best be equal to last year, but could be down by as much as 10 per cent.

While the number of new car imports remains insignificant at just 105 for the year, there was a surge in used car imports, particularly in the final quarter. Total used car imports in 2016 stood at 72,182, up 51 per cent on last year. Imports were up over 110 per cent in November and 93.4 per cent in December compared to the same months last year.

Michael Rochford, Managing Director of used car history checking website Motorcheck.ie said with the advent of Brexit and the weakening of sterling, used car imports grew significantly in the second half of 2016 with each of the last five months of 2016 posting increases in excess of 75 per cent on the previous year.

“There is evidence to suggest that a lot of people who may have been waiting to purchase a new car in 2017 took advantage of the drop in sterling and opted to import a nearly-new vehicle at the end of 2016 instead,” he said.

According to Alan Nolan, Director General of the Society of the Irish Motor Industry: “used car imports have also seen growth, partly due to the strong economic recovery, but also driven by short supply of 2009-2013 Irish used cars and the strengthening of the Euro against sterling following the Brexit Referendum. Almost 50 per cent of imported used cars were in this age profile, between three and five years old, and almost another 40 per cent are over six years old.”

1 Tax and spend: What have FG done for your pocket?
2 Fair Deal nursing homecare leaves little for bills and gifts
3 Pensions row fix could threaten future of State payment, actuaries warn
4 SAP hit by fall in cloud computing orders
5 Will the next decade be a better one for value investors?
6 Republic falling behind in offering incentives for entrepreneurs
7 Banks withdrawing from ATMs – another failure of regulation
8 Abtran challenges award of €63m contract by Irish Water to rival company
9 Domestic economy to grow by 3.6% but Brexit threat looms
10 Luca De Meo named chief of French carmaker Renault
Real news has value SUBSCRIBE