Retail rents to grow 7-10% over next two years – Savills 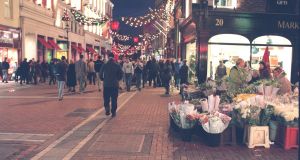 Savills is forecasting rental growth of just under 10 per cent in Grafton Street by the second quarter of 2018. Photograph: Cyril Byrne

Retail rents are likely to grow by between 7 and 10 per cent over the next two years, according to a report from property consultants Savills Ireland.

John McCartney, director of research at Savills, said rents are entering a phase of slower growth.

“Rents in some prime shopping locations have already risen by more than a third over the last three years,” he said. “As the retail economy transitions from its early recovery phase to a sustainable growth phase, base effects are inevitably going to dampen the annual percentage increase in rents.”

According to MSCI data, rental growth on Grafton Street eased from 21.8 per cent a year in the first quarter to 19.2 per cent in the following three-month period, before slowing to 14.1 per cent in the third quarter.

Savills is forecasting rental growth of just under 10 per cent in Grafton Street by the second quarter of 2018 and by around 7 per cent for less prime markets.

Larry Brennan, director of retail at Savills, said demand from international retailers remained strong, as evidenced by the upcoming openings of & Other Stories and Victoria’s Secret on Grafton Street, in addition to the new Top Shop flagship store in Jervis Shopping Centre.