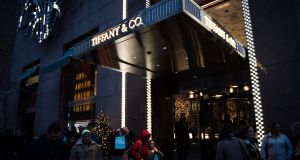 Tiffany & Co reported its first rise in sales in eight quarters, as strong sales in Japan and China more than offset a decline in the United States – its biggest market.

Shares of the company, which makes the iconic “Tiffany Setting” diamond engagement ring, rose 3.7 per cent to $81.00, in light premarket trading on Tuesday.

“Our business in Japan performed well, which we attribute to spending by domestic consumers,” chief executive Frederic Cumenal said in a statement.

Analysts, on average, had expected a 2.8 per cent drop, according to research firm Consensus Metrix.