Ad to retailers for new brand ‘should not have run’, Irish head of tobacco giant says 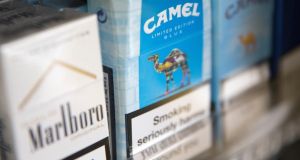 Philip Morris said: “The phrase ‘menthol blend’ should not have been used in the advert because the product does not contain any menthol.” Photograph: Simon Dawson/Bloomberg

Philip Morris, the company that makes Marlboro cigarettes, has told Irish retailers it made a “mistake” by running an advertisement in the trade press here for a “menthol blend”, Marlboro Bright, which it introduced in Ireland after discontinuing its old menthol cigarettes, Marlboro Green.

Menthol cigarettes were banned across the European Union and in the UK on May 20th.

Peter Nixon, the managing director of Philip Morris for the UK and Ireland, wrote a piece for the latest edition of trade magazine Retail News to say the advertisement “should not have run”.

The ad for retailers had described the new Marlboro Bright as “the Marlboro menthol blend – without methylation”.

Mr Nixon said it was a “a poor choice of words open to misinterpretation” and insisted Marlboro Bright is “a traditional cigarette that has no menthol in it”. He said “methylation” was a “typo” that should have read “without menthol”.

When asked by The Irish Times what it meant when it said in its original ad that the new Marlboro Bright brand is a “menthol blend”, Philip Morris said: “The phrase ‘menthol blend’ should not have been used in the advert because the product does not contain any menthol. Marlboro Bright is a traditional cigarette. The advert was a mistake and should never have run.”

It declined to directly address repeated questions as to why the phrase “menthol blend” was used in the advertisement in the first place.

Philip Morris insisted the new brand is in full legal compliance with the ban.

JTI has previously acknowledged that it still adds menthol during the manufacturing process but it insists this is legal as long as the additive does not result in a characterising smell or taste in the cigarettes other than tobacco.

The Health Service Execcutive has told The Irish Times it is investigating if any tobacco companies are in breach of the menthol ban. The market here for menthol cigarettes was €250 million prior to the ban.

Philip Morris’s Mr Nixon also said The Irish Times had added to market confusion in a previous report on the subject: “The Irish Times claimed that we justified Marlboro Bright’s compliance because ‘the cigarette doesn’t taste of menthol when it is smoked’. We never said this.”

Addressing the fact that it had still been possible to buy a packet of the banned Marlboro Green cigarettes at a Dublin retailer after the ban was introduced last month, he said “this sale was illegal” and urged Irish retailers to contact Philip Morris in relation to a stock buy-back scheme that it is running.