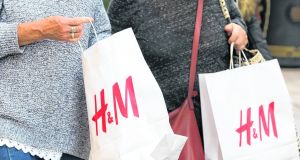 H&M, the world’s second-biggest fashion retailer, reported a sharp but slightly smaller than expected drop in second-quarter sales as measures to slow the Covid-19 pandemic slammed the sector.

The Swedish company’s net sales for the three months to May 31st fell 50 per cent from a year earlier to 28.7 billion crowns (€2.7 billion). Analysts had on average forecast a fall to 27.5 billion, Refinitiv data shows. Online sales jumped 36 per cent.

H&M, which began gradually reopening stores in late April after about 80 per cent were shuttered by the pandemic, said local-currency sales in the first 13 days of June were down 30 per cent. “The pace of the sales recovery varies largely between markets,” it said.

RBC analyst Richard Chamberlain, with a “sector perform” rating on H&M, said he remained relatively cautious on the margin and inventory outlook, and predicted sales would keep recovering only gradually.

“In many markets we expect to see customers preferring to shop locally and more pressure on urban locations more reliant on tourism and people using public transport,” he said.

H&M’s biggest rival Inditex, the owner of Zara, recorded a 44 per cent sales drop for the February-April period, with constant-currency sales down 34 per cent over June 2nd-8th.

Shares in H&M, which has flagged its first loss in many decades for the second quarter, were down 2 per cent in early trade and 26 per cent so far this year.

Before the pandemic, H&M was well on its way to end a years-long rise in inventories after many stores struggled with digitalisation and tougher competition.

Chamberlain said inventory had been tightly controlled through the pandemic but he expected it to have risen in May as delayed products from China and Bangladesh arrived in stores. – Reuters