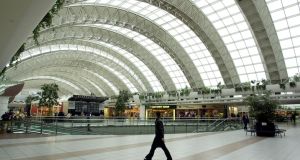 Goldman Sachs is in advanced talks to take over the Blanchardstown Centre from owner Blackstone, according to sources, as the pandemic prompted retailers to close their doors and sent rent collection plunging.

The facility is the largest shopping centre in the country.

Blackstone bought the Blanchardstown Centre in northwest Dublin for close to €1 billion in 2016, with lenders including Goldman providing financing.

Rent collection dropped to 25 per cent during the pandemic, according to the sources. Representatives for Blackstone and Goldman declined to comment.

Shopping centres throughout Europe are struggling during the pandemic. They took a fresh hit in Ireland this week when the Government imposed a new national lockdown, closing all non-essential stores.

Blanchardstown suffered a blow earlier this year when one of its key tenants, Debenhams, among the UK’s biggest department stores, closed its doors and left the country.

Ireland’s retail property market is “largely paralysed”, with vacancies rising and an increase in negotiations between landlords and tenants, many of whom are struggling to pay the rent, the Irish unit of brokerage CBRE said in a note last month.

It was reported in August that Blackstone was prepared to surrender control of Blanchardstown if lenders, which also include AIB, did not agree to a negotiate a debt deal. AIB declined to comment.

In December the centre was valued at about €900 million, and had about €735 million of outstanding debt, according to sources.

Goldman – whose mezzanine loan is junior to debt held by other lenders – plans to inject fresh capital and is likely to pursue a number of projects at the site should the deal be finalised, including redevelopment of space vacated by collapsed retailers, the sources said.

Blackstone’s purchase of Blanchardstown was a bet on the prospects of the Irish economy at the time even as it shunned retail property investments elsewhere.

Jon Gray, the private equity firm’s president, said in June that he saw a bumpy road ahead for investments in retail real estate, with malls under pressure.

Blackstone continues to invest heavily in Ireland, adding more than €600 million of Irish offices and warehouses to its portfolio so far this year. – Bloomberg