Passengers not obliged to show boarding cards in airport shops 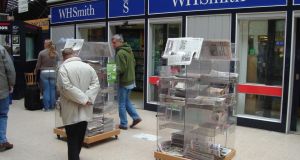 Retailers operating in Dubin Airport have said consumers do not have to show boarding passes when making purchases but sources say a widespread failure to produce them would ultimately lead to prices rising.

WH Smith, which operates several concessions in the airport, said boarding passes “were requested from customers and not demanded” and there was no obligation on the part of consumers to comply with the request.

Similarly the DAA, the company that manages the shops at Dublin and Cork airports, said it asked all customers for boarding passes but would only insist they were produced when customers were attempting to buy duty-free products such as tobacco and alcohol.

A DAA spokesman said passengers were routinely asked for boarding cards and if they refused, they were asked to supply an end destination. If they refused to provide this, the sale could still be processed as long as the products were not in the duty-free category.

The retailers were responding as a controversy grows in the UK over reports that many retailers who operate in international airports are maximising their profits by scanning boarding passes and using the information to claim VAT back from passengers who travel outside of the EU while refusing to pass rebates back to customers.

Under EU law retailers can claim back VAT on sales to those leaving the EU but they have to process boarding cards in order to claim it.

Around 20 per cent of passengers who fly through Dublin Airport are travelling to destinations outside the EU. However with the exception of duty-free areas, the savings are not passed directly on to them.

Airport sources in Ireland said that if this consumer movement gathered momentum in the Republic than prices would inevitably climb.

“If a large number of VAT rebates could not be processed then that would hit retailers profits and their ability to pass on savings to consumers. So ultimately it would see charges rise for all passengers.”

The DAA said shops run by its subsidiary Aer Rianta International (ARI) “offer a single price to all customers across many product categories, whether they are travelling to a duty paid or to a duty-free destination. In this way, we pass on VAT savings for duty-free passengers to all of our customers.”

It said it had two separate prices for alcohol products – duty paid and duty free – and also sells premium liquor brands at a reduced, fixed price for travellers to all destinations. It claimed that prices on many product ranges were as much as 20 per cent below those charged in non-airport shops.

“Boarding cards are scanned by ARI for a number of reasons. These include checking whether a passenger is travelling to a duty-free or duty-paid destination and understanding passenger spending patterns,” it said. “We use this information in conjunction with other market research to improve the retail offer in our stores, and to help plan staffing levels.”

When contacted by The Irish Times WH Smith said that boarding passes were requested from passengers but not demanded. “Any [VAT] relief obtained is reflected in our single price and extensive promotional offers provided to all of our customers,” it said. “Operational and financial system constraints make any form of ‘dual pricing’ for our extensive product file a practical impossibility.”

Meanwhile, the Competition and Consumers Protection Commission has urged retailers operating in Irish airports “to be very clear with their customers as to the circumstances where they collect VAT on behalf of the State or where VAT is not charged”.

A spokeswoman also said “consumers should also be advised of the reasons why boarding cards are requested when making purchases in Irish airports. This information will allow consumers to make an informed decision and decide if they wish to make purchases from the retailers operating in Irish airports.”