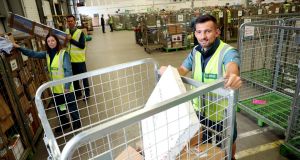 Staff at work in An Post’s Merrywell Parcels Depot in Dublin. An Post is planning to grow its revenues from parcel deliveries to more than €200 million by 2020. Photograph: Maxwells Dublin

An Post has signed a deal to grow its share of the e-commerce parcels market by joining the DHL Parcel Europe network.

The development comes two months after An Post signalled plans to grow its share of the fast-growing parcels segment of the market to 35 per cent by 2020 from 25 per cent currently. This would involve growing revenues to more than €200 million from €120 million at present.

The company launched a new campaign over the summer, dubbed “World Wide Open”, following extensive industrial relations negotiations with workers, to enhance its parcel service to include Saturdays and weekday evening deliveries in urban areas.

Around six billion e-commerce parcels are being shipped within Europe each year, with Germany, France and the UK being the largest markets. According to Eurostat, 55 per cent of internet users in Europe already shop online, but only 32 per cent of them do so outside of their country.

An Post estimates that the DHL partnership will soon be responsible for nearly one million parcels coming into this country. There are currently 25 other countries across DHL’s Parcel Europe network.

If you injure yourself working from home, is your employer responsible? 05:24
Major investment in ports for offshore electricity industry urged 05:21
Irish business of Carluccio’s restaurants to be wound up 05:13
Ireland stands to benefit in a big way from investing in public transport 05:02
Michael Smurfit: ‘I asked Trump to invite me to the White House for my 80th birthday’ 05:00

1 Michael Smurfit: ‘I asked Trump to invite me to the White House for my 80th birthday’
2 ‘I’m so lucky to be in the Caribbean – a million miles from Derry Girls’
3 Covid-19: Small businesses are left as cannon fodder in our zealous anti-virus experiment
4 Tax and the Pandemic Unemployment Payment: Your questions answered
5 Charlie Chawke plans 290 apartments and hotel on Goat pub site
6 Revenue fears fraudsters tapped bank details of 3,000 taxpayers
7 Joint accounts: if one of us dies, can the other access the money?
8 Virgin Media’s Gavan Reilly named most influential Irish journalist on Twitter
9 View from Portugal: Commuter life in Dublin would be ‘just a horror show for us’
10 Ireland stands to benefit in a big way from investing in public transport
Real news has value SUBSCRIBE