After a change in ownership, Niall Anderton is overseeing fuel group’s rebrand to Circle K 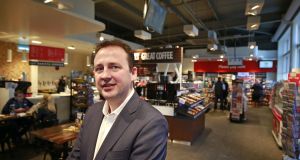 An Englishman, an Irishman and a Scotsman walk into a petrol station. It’s Niall Anderton – born near Glasgow, raised in Sussex, matured in Blackrock – the chief executive of forecourts retailer Topaz, soon to be rebranded Circle K. He is showing me around the group’s €3 million filling station in Citywest.

Anderton took the top job at the roughly 440-strong network of forecourts – by far the biggest in the State – last February after Denis O’Brien sold it to listed Canadian group, Alimentation Couche-Tard, for €258 million of cash plus debt.

He took over from Emmet O’Neill, O’Brien’s nephew, to whom Anderton had previously reported as chief financial officer before the Canadians came over the hill waving a big cheque.

Anderton, a refreshingly jaunty sort of chap for an accountant, gives a swift showaround of the shiny Citywest facility, a harbinger of what’s to come under its new owners, with its Miles branded fuel pumps, Cantina Mexican food counter, and the Simply Great Coffee own-brand hot drinks offering. Couche-Tard apparently has big ambitions for its new Irish business.

Next summer, its branding strategy will come full circle, so to speak. The Topaz brand over the forecourt fuel canopies, as well as the Re.Store moniker that adorns the shopfronts, will both be put out to pasture, to be replaced by Circle K, Couche-Tard’s global forecourts and convenience retail brand.

Anderton won’t say how much the rebranding will cost. But you’d be hard-pressed to get much change out of €15 million for such a major switchover. The whole process could take up to 18 months to complete, he says.

“We’re in the middle of awarding the contract to do the physical work. It will take a week to re-dress each site. The company we’re talking to has five crews, so you can see it will take a bit of time. But we will do it as fast as possible.”

Walkaround done and dusted, we look around the fuel station for somewhere to sit down and have a proper talk. All the chairs and tables beside the food counters are full: the station is rammed with workers from the local industrial estate.

Not quite the return of breakfast-roll men, more the burrito boys and girls.

What to do? We can’t go out on to the forecourt to talk. It’s that chilly, you’d almost expect to find Jean-Claude Van Damme out there leaning against a pump, swigging on a Coors Light like he does in the television advert and talking deliriously to his own nipples.

Anderton, a KPMG-trained accountant, has a brainwave: we’ll do the interview in the tiny cash office out the back. It’s a little bit cosy, mind, in every sense of the word. Not much by way of legroom but we settle down for a chat, Anderton swinging on a wheelie chair where the staff count the tills, me huddled in against the huge safe.

He is good company. Young (for a chief executive, at 43), friendly and garrulous, Anderton concedes that he talks far too fast. It is supposedly a “sign of intelligence”, he jokes.

Babble away, I tell him, trying desperately to match his speedball patter. It’s no use. Anderton talks way faster than I do. Damn it anyway.

First, his background. He’s the perfect splice of Britishness and Irishness – they should have dialled him up to break the logjam at the Brexit talks. Born in Paisley, Renfrewshire to an English father and an Irish mother, the family left Scotland when Anderton was three.

The business soon-to-be-formerly known as Topaz has a third of the Irish forecourts market, as well as a joint venture with Shell refuelling aircraft

His father worked for the computer company IBM. “I was thinking about it this morning – he is retired since he was 52 and he is 78 now. My Dad has been retired longer than I’ve been working.”

The family moved to the English south coast, settling in the dog-eared seaside resort of Bognor Regis, a sort of pound shop Brighton. The mods and rockers war was probably slightly before his time, but Anderton still recalls motorcycle gangs knocking several shades out of each other on the promenade.

The family moved to Dublin when he was 15 and Anderton was sent to school at Blackrock College, whose famous alumni include ex-rugby player Brian O’Driscoll and Bob Geldof, the singer and freeman of London.

How did he fit in at the end of the 1980s among a group of hormone-ravaged Irish rugger buggers, the new boy with the English accent?

“I nailed it, loved the place. I’m fairly outgoing. I was only there for three years and I was class rep for two of them.”

After commerce and accounting at UCD, followed by training and a post-qualification stint with KPMG – the Blackrock College of bean counters – Anderton joined fashion chain A-wear as financial controller.

“I wanted to get into retail, people could relate to it. They have an opinion on the shops they go to. That’s interesting to me. Who wants to do the books in a company selling widgets?”

His next move was less glamorous – a logistics company in north Dublin: “I had been working with all these perfectly turned-out women in a fashion retailer. Next thing, I’m working with a load of truck drivers in Damastown.”

At this stage of our chat, we’re interrupted by a loud whooshing sound and a thunk right above my head. It sounds like somebody is hoovering from inside the safe. Anderton explains that the staff at the tills regularly deposit rolls of cash from the registers into a pipe that sucks the money directly into the vault. It keeps happening every few minutes. The chief executive beams each time.

After moving through the management gears, first at mobile operator O2, and then discount fashion retailer Primark/Penneys, Anderton was tapped up by one of O’Brien’s circle to join his fuels group. Less than a year later, the businessman had agreed the outline of the deal to sell it to the Canadians.

The business soon-to-be-formerly known as Topaz has a third of the Irish forecourts market, as well as a joint venture with Shell refuelling aircraft. Headline revenues are €2.5 billion, but most of that is fuel trading with wafer thin margins.

Last year’s operating profits were €46 million. The group has about 1,700 employees and operates roughly 160 sites itself – the rest are independently owner-operated “dealer sites” who wear the brand and buy fuel from Topaz.

Rebranding aside, Anderton’s plan is to optimise the group’s operation as a fully-integrated part of the global Circle K retailing network. He vows to adopt the Circle K motto “let’s make it easy” [for customers].

Ireland is renowned as one of the most sophisticated convenience retailing markets in the world. Circle K plans to ride the wave of fresh food convenience retailing, displacing sales of sweets and other assorted bold stuff. Coffee is another huge growth area, and Anderton has just finished replacing the machines at all of its company-owned sites as part of the Simply Great Coffee rollout.

Another – this time internal – Circle K motto, Anderton spills, is to “steal with pride”. Steal ideas, he means. Circle K executives are regularly gathered together on “safaris” to visit other retailers around the world, identifying trends.

Circle K has already proudly pinched some of Topaz’s ideas from the Irish market, and is rolling them out internationally in the wider group. The Cantina Mexican food concept, devised in-house by Anderton’s team, is already being tested in Norway (Circle K previously swallowed Statoil).

“They’re also looking at putting it into California.”

Deli staff at Circle K in the US used to make sandwiches on counters with their backs to customers. After a visit to Ireland, group executives cottoned on to the Irish concept of switching the counters around so that they’re facing forward.

The parent group is also following its Irish investment with a wad of cash to dickey up the carwashes, which are a core part of the Circle K offering globally

“Circle K will take the best of what we have and use it elsewhere.”

Will they pay the Irish operation for pinching its ideas? Anderton smiles.

“Nah. You just have the pride of knowing that one of your concepts has been exported to the wider group.”

The parent group is also following its Irish investment with a wad of cash to dickey up the carwashes, which are a core part of the Circle K offering globally. It is also investing heavily in the installation of electric charging points.

The first Irish group forecourts to bear the Circle K brand will likely be new sites at Fermoy, Co Cork and “City North”, on the M1. It also plans to rebrand its aviation fuel division, although this remains to be hammered out with its joint venture partner. Anderton says he also would love to open some non-forecourt standalone Circle K convenience retail outlets, but there are no firm plans in place.

All in all, he is sanguine about the company’s future. And why wouldn’t he be? The Irish consumer economy has gone off like a box of frogs over the past 18 months, with no sign of a let-up.

The formalities dispensed with, Anderton reveals the group’s Christmas party is scheduled for later in the evening. It is based on a “1920s, Prohibition theme”.

You mean Al Capone, Chicago, gangsters, two-tone shoes and all that jazz?

Anderton looks game enough, but – unlike a few people in Irish business – he just doesn’t seem the gangster type. Too chatty, too friendly to frighten anyone.

Hobbies: He goes to the gym twice a week. A major horseracing fan, he also goes to Cheltenham every year.

Something you might expect: A Blackrock College old boy, he likes rugby.

Something that might surprise: He ditched his UK passport for an Irish one.