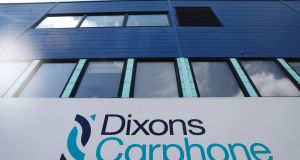 Dixons Carphone, which owns Currys, PC World and Carphone Warehouse, said on Wednesday it would reposition its mobile phone business as it reported a 60 per cent slump in first half profit, hurt by a weak mobile market as customers hold on to handsets for longer.

The British group, which issued a profit warning in August, also cut its profit forecast again for the full 2017-18 year, reflecting the later launch of the iPhone X.

But shares in Dixons Carphone which have more than halved this year, rose up to 9 per cent after it said it had traded well in its second half so far, with record sales from November’s Black Friday promotional event, and would maintain its full-year dividend.

“We think its business is likely to prove more resilient than the market expects given share gains in electricals and its Nordic exposure,” said RBC Europe analyst Richard Chamberlain, who has an “outperform” rating on the stock.

Dixons Carphone, which trades as Currys, PC World and Carphone Warehouse in Britain, said UK and Ireland mobile phone like-for-like sales fell 3 per cent in the first half, while electricals sales rose 6 per cent.

Chief executive Seb James said a combination of higher handset costs and relatively incremental technology growth meant customers were holding on to handsets for longer and some were choosing a SIM-only contract in the meantime.

The group had made “a very conscious decision to fight hard to drive sales” in mobile, retaining its position as the British market leader, but the move had hit profitability.

“We recognise that the performance of the mobile division needs addressing, and are taking action to adapt our model,” said Mr James.

“We believe that we can, over time, reduce the complexity and capital intensity of our mobile business model, and increase the simplicity and profitability of what we do,” he said.

More strategically, the firm was considering changes to its relationships with the big phone networks – EE, O2 and Vodafone.

“Those are three big relationships with complicated, long-term agreements, which we are talking to them about re-aligning,” Mr Singer told reporters.