First jackpot of 1,000 bitcoins, currently valued at €14.2 million, kicks off on Monday 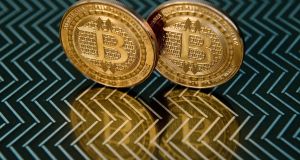 Bitcoin was set up in 2008 by an individual or group calling itself Satoshi Nakamoto. Photograph: Karen Bleier/AFP

The draw, which takes place every day except Sunday, involves 1,000 bitcoins, worth about €14.2 million, and is based on a similar format to the Irish lottery. Winners can also avail of a cash equivalent.

Consumers will chose six numbers out of a pot of 49 with the odds of winning at 14 million to 1.

“Bitcoin is a worldwide phenomenon, and Lottoland is giving our customers the opportunity to get involved in the big league,” said Lottoland’s Irish country manager Graham Ross.

Bitcoin’s significant price fluctuations come amid a sea of speculation that the currency is in bubble territory.

Bitcoin was set up in 2008 by an individual or group calling itself Satoshi Nakamoto, and was the first digital currency to successfully use cryptography to keep transactions secure and hidden, making traditional financial regulation difficult if not impossible.

Germany joined European governments on Monday pushing for global bitcoin regulation amid mounting alarm that the world’s most popular digital currency is being used by money-launderers, drug traffickers and terrorists.

Germany’s finance ministry said it welcomed a proposal by French finance minister Bruno Le Maire to ask his counterparts in the Group of 20 to consider joint regulation of bitcoin.

The concerns are shared by the Italian government, which is also open to discussing regulation, while the European Union is bringing in rules backed by the United Kingdom that would apply to bitcoin.

The first draw of the product from the Gibralter-based Lottoland, which has an operation in Ireland, took place last night. Consumers can pay as little as €3.50 to enter online.