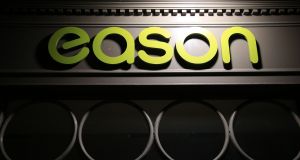 Eason has sold its 50 per cent stake in EM News Distribution to Menzies in a €3.6 million buy-out. Photograph: Nick Bradshaw

According to a statement, Menzies will now increase its existing 50 per cent interest in the company to 100 per cent, thereby buying out the 50 per cent share held by book retailer Eason.

The most recent accounts filed with the Companies Office, in September of last year, showed that EM News Distribution had pretax profits of €532,000, a decline from €1.15 million the previous year. At the time, the company directors said, “the business is subject to external consumer trends and demands. This is evident in the continued slow decline in national newspaper and magazine volumes”.

Paul McCourt, finance director of Menzies Distribution, said: “taking full control of EM News Distribution gives us the opportunity to bring our full expertise to bear on service the newstrade sector across Ireland. It also provides us with a similar platform to explore new logistics services in Northern Ireland and the Republic of Ireland”.

Liam Hanly, incoming managing director of Eason, said: “This sale is consistent with the strategy we’ve pursued in recent years to focus on growing and developing our retail operations and exiting non-core businesses. We will continue to collaborate with EM News Distribution and wish Menzies and the EM News Distribution team all the best in the future.”

The joint venture between Eason and Menzies was signed in January 2007 and was estimated to have gross assets of €10 million at the time.

EM News Distribution employs 193 operational staff in a variety of depots across Ireland who will all join Menzies Distribution.