Europcar’s Colm Menton on the ‘tough business’ of car rentals

The head of Europcar Ireland, which was recently sold back to its French parent for an estimated €26 million, has steered the local franchise to great success, increasing annual revenues from a paltry €200,000 to close to €60 million this year 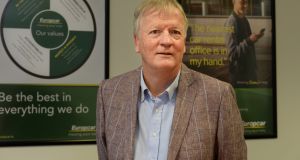 He may have been behind the wheel of one of Ireland’s largest car rental companies for 20 years, but Colm Menton is the first to admit he is sometimes baffled as to how anyone in the sector actually makes any money.

As the head of Europcar Ireland, which was recently sold back to its French parent for an estimated €26 million, Menton has steered the local franchise to great success, increasing annual revenues from a paltry €200,000 to close to €60 million this year.

Clearly he knows a bit about bringing in the pennies even if he believes the business model shouldn’t really work.

“When you think about it, the industry doesn’t make a lot of sense. Car rental is an extremely competitive business as a look at the rates on any website shows. Every company has to create incremental sales to make it all work because renting cars at say €5 or €10 a day doesn’t even cover the insurance,” says Menton.

“The reality is that market forces have pushed prices so low that everyone has to sell upgrades, which people then complain bitterly about. I’m not saying they are wrong to do that, but it is impossible to operate otherwise,” he adds.

Menton has promised to stay on for a further two years at Europcar following the recent sale, after which he intends to take things a little easier by focusing on some smaller businesses in which he retains an interest.

“It won’t be hard to walk away from the motor industry. It is a tough business,” Menton says. His plans include taking a more active role in EcoMod and Ground Protection Ireland, two companies currently run by his brother Malachy. He has also recently invested in Dynamic Res, a travel agency reservation platform developed by Darren Cantwell and Daragh O’Shea.

In the interim, the sports-mad Clontarf-born businessman is charged with further growing revenues at Europcar Ireland. He is also seeking to futureproof the company through closer ties with its car-sharing sister firm GoCar. The start-up has been busy developing its own technology platform, which Menton believes will give the group a significant edge over its rivals in the coming years.

Both Europcar Ireland and GoCar were sold in the recent deal which saw ownership of the Irish franchise transferring back to the French car rental giant from the Ormen Group, a firm established by Menton. Its other directors were Stephen Gleeson and Eugene O’Reilly, managing director and executive chairman respectively at Hyundai Cars Ireland.

“You can’t plan a deal like that. It came suddenly and we took the decision to sell. Why? Because I’m 61 years old and don’t have any family in the business,” he says, taking a seat in his office at Europcar Ireland’s headquarters in the Northwood Business Park in Santry.

“I would like to think I can last forever, but I know that is not true in reality. Increasingly, my brain works more slowly as the day goes on and I have told my team not to come near me after 4pm. If they need anything, they are better off approaching me first thing in the morning!” Menton adds.

As it stands, Europcar is hardly in bad shape, with the local unit having recorded turnover of more than €50 million last year. Revenues have been boosted by a long-term plan to embrace more corporate customers, rather than rely on tourism.

“Our base will be split 65/35 in favour of corporate customers by 2018, so we’re making progress to our ultimate goal of having a 75/25 split, and we’re projecting overall growth of about 10 per cent this year,” says Menton, his northside accent still firmly intact.

The businessman previously founded leasing company Cambridge Investments in 1987. It went public two years later and then promptly folded amid much rancour in 1993.

He was also heavily involved in Redbrook, a food ingredients distributor which was acquired in a $45 million deal last year by Israeli company Frutarom.

He admits he had little knowledge of either leasing or food ingredients before becoming involved with Cambridge and Redbrook. He also knew next to nothing about the car rental industry until he took a punt on it.

Menton’s introduction to car rental came via an opportunity to take a 25 per cent stake in the Malone Car Rental Group in late 1997.

“I knew very little about car rental initially, but I’m an entrepreneur so I love to take chances and it only cost IR£40,000 so it didn’t seem like a ridiculous risk. I would have looked at about 10 businesses at the time and that was just one of them, but I figured I could make it work and so learnt on the job,” he says.

Being largely reliant on tourists for revenues at that time meant that while the company did fine in the summer months, it faced difficulties come winter.

“The business started with 32 cars but we weren’t sure what we’d do when the summer ended so I set up a corporate division to cater to SMEs and that has evolved to the point that we now have 1,000 vehicles on the road,” he says.

Over the years the business continued to grow, primarily through franchising. In addition to holding the Europcar franchise for Ireland, Ormen was also the parent of Irish Car Rentals, which Menton took out of examinership in 2010, and it owned Executive Trust, which operated the Thrifty and Dollar brands in Ireland until Hertz acquired the Dollar Thrifty Automotive Group in late 2013.

Now one of Ireland’s top three rental companies, Europcar Ireland operates in 19 locations and has an average fleet of 6,000 vehicles. It employs about270 people and its parent is the largest car rental group in Europe. GoCar, which is typically used on a pay-per-use basis, has more than 200 cars on the road and more than 10,000 members.

“We bought GoCar in April 2012 at a point when it was struggling and have invested close to €1 million to get it to where it is now. The business probably lost about €100,000 in 2015 but turned a profit for the first time last year and is now bringing in strong profits each month,” says Menton.

“It is the way the future is going in terms of people giving up car ownership, and we’re very excited about its prospects,” he adds.

Menton says plans to scale GoCar were delayed for some time because, while there was a lot of enthusiasm for it, few people were willing to cough up for the service.

“Early on, we were putting the cars all over the place because organisations of all kinds wanted to be associated with it and were asking us to have a base on their premises. However, this didn’t always transfer into revenues so we pulled back from that and decided we’d only offer GoCar in places where people were prepared to pay to use it,” he said.

The businessman dismisses suggestions that Europcar may be cannibalising its own market share through its investment in GoCar.

“Europcar has 20 per cent of the market here so there is still plenty out there to claim. Also, you can’t consider where you are cannibalising yourself when the focus needs to be on increasing revenue and giving the customer what he or she wants,” he says.

Menton can see a time when the software developed for GoCar, which allows members to book and access vehicles independently through their smartphones, could be used by Europcar.

“Corporates will be GoCar’s primary marketplace eventually and we could end up putting the technology into Europcar rentals to allow customers to bypass the desk and just get in a vehicle and go. We’re not far from that possibility,” he says.

“GoCar is what Thrifty was 15 years ago in terms of the energy, its size, and the excitement that surrounds it. It is a small company and so can make quick decisions, which we’re not always easily able to do with Europcar. That is not to take away from Europcar, which I believe is ahead of its rivals in terms of technology. I think the company, both in Ireland and further afield, has a real opportunity to grow strongly in the years ahead based on this,” Menton adds.

Looking further afield, the entrepreneur is unsure of how quickly we’ll migrate to a world in which electric and/or autonomous cars are ubiquitous. A more pressing issue as far as he is concerned is curbing the cost of whiplash claims. The usually publicity-shy businessman recently spoke out about the matter, saying he had it on record from a number of insurance firms that they would cut the cost of premiums if compensation for claims was capped.

He also worries about the impact of Brexit on the business, although admits that at this stage it is hard to tell how badly things might go.

Menton comes from a well-known family. His father, Brendan, was an economist who worked alongside TK Whitaker and who helped found Home Farm Football Club. One of his brothers, also Brendan, was secretary of the Football Association of Ireland, and another, Kevin, represented Ireland at tennis in the Davis Cup.

He himself became relatively well-known after setting up Cambridge Leasing, which at one stage owned Xtravision. While reluctant to dig over old ground he admits he’s proud of what he achieved with the company.

“The concept was great and I have to admit I wasn’t in good shape when it ended for a while because it was my life. I went from being worth millions to having nothing, but time heals. Looking back, I realise that I’m an entrepreneur and, in reality, entrepreneurs probably shouldn’t run established companies. If I was to live it all again, I’d have got out of Cambridge within a year of it going public,” Menton says.

Having achieved both success and failure in a number of different industry sectors, the “born businessman” recognises that taking a back seat altogether isn’t something that is going to happen, even if he is nearing retirement age.

“I like working and there is no doubt I’m a workaholic. However, I have to slow down because there are a lot of miles on the clock and I just can’t keep up with the pace,” he says.

Family: Married to Geraldine for 37 years, they have sons and a daughter

Something you might expect: Colm is passionate about sports and was previously president of Clontarf rugby club. He’s given up tennis because of his knees, but still plays golf, although not often enough to get beyond a handicap of 16.

Something that might surprise: “I don’t think I’m a natural chief executive because I’m not very structured in my thinking.”