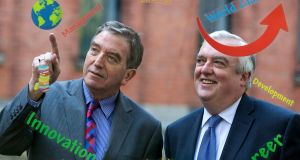 The UCD Smurfit Business School has been ranked 48th in the world and 26th in Europe in the ranking of open enrolment programmes, according to the 2017 Financial Times Executive Education Rankings. The school was identified as the highest climber in the rankings, jumping 21 places since 2016.

IMD, based in Switzerland, and IESE Business School in Spain have tightened their grip on the top spots of the rankings, monopolising first and second places for both open-enrolment and customised programmes.

IMD comes top in the 2017 ranking of open-enrolment courses, available to all working managers. It also jumps two places to second in the ranking of customised programmes, which are tailor-made for corporate customers. IESE holds on to the top spot in the custom ranking and remains second in the open ranking.

It is the first time in the rankings’ 19-year history that two schools have between them held the top two spots in both categories.

The 2017 FT Executive Education Rankings include the best 85 customised programmes and the best 75 open-enrolment programmes worldwide. The rankings are based principally on measures of participants’ and clients’ satisfaction, as well as the schools’ growth in revenues, their international reach and faculty diversity.

In a statement, UCD said that Smurfit Executive Development school was ranked fourth for growth and repeat business, 36th for quality of faculty, 39th for teaching methods and material, and 42nd for aims achieved.

Prof Ciarán O’hÓgartaigh, dean of the UCD College of Business, said that “today’s achievement marks continued evidence of excellence as three of our programmes are now ranked in the Top 50 in the world by the FT”.

The IMI said it had now retained its global ranking for customised programmes for a ninth consecutive year. It pointed out that the the IMI is now ranked 20th globally in the “future use” category, climbing 11 places. This measures whether companies would use the school for future programmes. In the “follow up” category, which measures the quality of follow-up offered after the course finishes, the IMI now sits in 24th place globally and fifth in the UK and Ireland.

In the open ranking, IMD, in Lausanne, scores particularly highly in the top 10 criteria based on a survey of executives who attended programmes. It is ranked first in three criteria and in the top five for the remaining seven.

IMD participants praised the way their training pushed them out of their comfort zones and also the one-on-one coaching sessions tailored to their individual business situations. “It was an eye-opener about what a good leader is,” commented one participant. “We learnt about ourselves first, what drives us and why, in order to manage others.”