Chief executive was pivotal in privatisation of the franchise 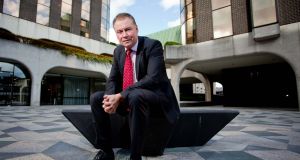 The boss of the National Lottery, Dermot Griffin, is to step down after 14 years in the job.

Mr Griffin played a pivotal role in the privatisation of the franchise in 2014, which raised €405 million for the State.

He is also credited with opening up the lotto’s online channel and returning lotto sales to precrash levels after several years in the doldrums.

Last year sales of tickets and scratch cards hit €800 million for the first time in 10 years.

It also noted that under his leadership, the business has raised €3.2 billion for good causes.

Mr Griffin indicated his intention to step down as chief executive of Premier Lotteries Ireland (PLI), the company that operates the National Lottery, later this year in order to pursue other opportunities.

“It has been a privilege to lead the National Lottery for the last 14 years during a period of continuous development in all aspects of the business, including the change in ownership from public to private,” Mr Griffin said.

“I am proud of what the Irish National Lottery has become and what it has contributed to Irish society. I feel that the time is now right for me to move on to new challenges,” he added.

Mr Griffin will continue to support the business in an advisory capacity in the coming years, the National Lottery said.

The board of PLI has appointed Barry Herriott of Korn Ferry to assist in the search for a new chief executive.

1 Fianna Fáil may have just pressed the pause button on the property market
2 UK to prioritise EU trade deal over one with United States
3 Who are Ireland’s 17 billionaires?
4 Are there annual limits on inheritances or gifts to a child?
5 Eason puts Blanchardstown store on market at €16m
6 My father in a nursing home wants to gift me his house
7 CVC must reveal Six Nations interest before Pro14 bid
8 State ranked highly for attracting skilled workers but low on gender equality
9 American YouTubers embrace the crisp sandwich
10 London fintech company Nuroco to expand here
Real news has value SUBSCRIBE