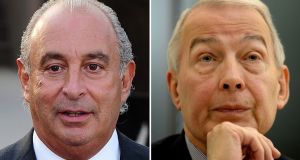 The flagship BHS store on London’s Oxford Street closed its doors for the final time last Saturday, prompting a wave of nostalgia and a rush of hard-hearted bargain-hunters.

“Everything must go!” proclaimed the banners plastered throughout the shop. And they really did mean everything – customers walked out clutching mannequins at £40 a go and clothes rails for £30. As for the rest of the stock, it was mostly the same old tat, only half the price.

Just over 100 stores have now shut and, by the end of this month, those still trading will all be shuttered, bringing to an end BHS’s 88-year presence on the British High Street.

Founded by a group of American entrepreneurs who wanted to create a UK version of Woolworths, British Home Stores opened its first store in Brixton, south London in 1928. All its products were priced at a shilling or less.

Five years later, the company was floated on the London Stock Exchange, but merged with Mothercare and Sir Terence Conran’s Habitat in 1986, forming the Storehouse retail empire. Retail tycoon Sir Philip Green bought the business for £200 million in 2000.

The BHS stores may now slowly be closing their doors but there’s no let-up in the recriminations over the biggest retail failure since the collapse of Woolworths in 2008, the plight of its 11,000 employees and its 22,000 pensioners.

Although the temporary reprieve may be good news for some staff, for others the delay to the inevitable loss of their jobs has proved particularly stressful. Some stores have had their closure dates extended several times already, leaving those lucky enough to have secured new jobs unable to let their new employers know when they can start.

There have also been reports that those opting to leave before their store closes could be denied their redundancy pay.

There’s been anger, too, about the actions of the restructuring firm, Hilco, which was appointed liquidator to BHS in June, when it became clear there would be no rescue bid for the business.

Hilco owns the Denby pottery company, which it bought when the business failed seven years ago, and has been using BHS stores to shift stacks of its cut-price crockery. As they dismantle the fixtures and fittings and slap price tags on them, BHS staff are none too pleased at being asked to shift outside stock brought in specially for the closing-down sale.

Meanwhile former BHS owner Green and his wife Lady Christina have been sunning themselves on an Aegean cruise aboard their £100 million super-yacht, Lionheart. Green, whose knighthood is under review by the cabinet office, has yet to come good on his promise to MPs two months ago that he would sort out BHS’s huge pension deficit.

The shortfall in the pension scheme – which was in surplus when Green bought BHS 15 years ago – stood at £571 million when the administrators were appointed in April. Since then, however, the post-Brexit cut in interest rates has seen gilt yields slump to record lows, taking the BHS deficit to an estimated £700 million-plus.

Green in turn accused Field of conducting a “kangaroo court”. He has already threatened to sue the MP over accusations that his behaviour at BHS was “worse than Robert Maxwell”.

The pressure on Green continues to mount, with the appointment earlier this month of US law firm Jones Day to investigate transactions carried out while BHS was still under his ownership. Jones Day, which is investigating the diesel emissions scandal at Volkswagen, will also look into the conduct of Dominic Chappell, the serial bankrupt who bought BHS from Green for just £1.

It’s just the latest in a series of inquiries that BHS and Green are now embroiled in. Also examining the circumstances of the retailer’s collapse are the Serious Fraud Office, the Pensions Regulator, the Insolvency Service and the Financial Reporting Council.

That’s a pretty full in-tray for Green when he returns to work from his luxury tour of the Greek islands.