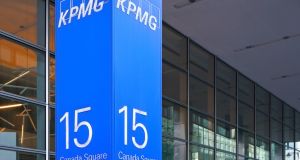 “We are all a bit frayed due to Covid,” said one of the employees who attended the KPMG meeting in question. Photograph: iStock

KPMG UK chairman Bill Michael is stepping aside while the Big Four accountancy firm investigates “alleged comments” he made during an online meeting with staff, a spokesperson said on Wednesday.

The move comes after the FT reported comments made by Mr Michael at a meeting with the firm’s financial services consultancy team on Monday where he told staff to “stop moaning” and to stop “playing the victim card”.

His decision to step aside came shortly after the FT requested comment on additional statements that KPMG staff attributed to Mr Michael during the same meeting.

Two insiders said that he told staff that he was meeting clients for coffee in spite of lockdown rules and dismissed unconscious bias as “complete crap”.

The statements triggered angry responses from KPMG staff on an app used to post comments anonymously during the meeting. The FT reviewed several screenshots of these comments.

One stated: “There’s no such thing as unconscious bias?! Are you joking? Please do your research before just making such statements. Check your privilege.”

Unconscious bias is widely believed to contribute to discrimination against minorities within large corporations.

Another comment said: “Did Bill Michael say unconscious bias is just crap? Herein lies the issue. Whilst the training may not be effective, to say it doesn’t exist is just reckless.”

Mr Michael also raised eyebrows by talking about meeting clients for coffee during lockdowns. One of the participants said: “He literally said, ‘I know I’m breaking the law’ to meet up with people during the pandemic.”

Michael’s tenure has been beset by controversies since he was elected to run KPMG UK in 2017. These include widespread criticism of KPMG’s role as auditor for the now defunct government contractor Carillion, and claims from some staff of a toxic culture.

Other participants in the town hall meeting said they were disappointed by Mr Michael’s suggestion that staff needed to stop complaining and work harder. This message was particularly badly received after a staff poll at the beginning of the meeting showed a high percentage of consultants said they were struggling to cope during the pandemic.

One comment on the app said: “Over 50 per cent of us on this call have just said we are either ‘hanging in there’ [OR]’drained’. I’m left incredibly unimpressed by the comments from our leadership.”

Another said: “Many junior employees... [have been] unable to see loved ones for ages and living in cramped quarters. Where is the empathy from leadership?”

One of the meeting participants said: “People are struggling with serious mental health issues and having our leadership tell us to shut up and pull ourselves up by our bootstraps is heartbreaking.”

Earlier in the week, Mr Michael apologised for his comments both at the end of the call and in an email to KPMG’s 1,500-strong financial services consulting team.

He said in the email: “I know that words matter and I regret the ones I chose to use today. I think lockdown is proving difficult for all of us. I am very sorry for what I said and the way that I said it.” – Copyright The Financial Times Limited 2021