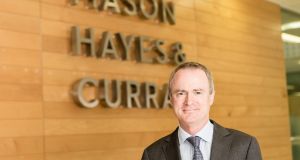 One of the Republic’s leading law firms, Mason Hayes & Curran, recorded a 6 per cent decline in its turnover last year to €80 million due to the impact of Covid-19 restrictions on its activity.

The firm said it was heavily affected in the second quarter of the year by a “pronounced slowdown” in transactional activity. In addition, contentious work was hit by significantly reduced court hearings from March onwards.

Despite the reduced turnover the Dublin-based firm appointed six new partners during the year, bringing the total to 95. However, its total headcount reduced to 529 from 540 a year earlier, with a reduction of 24 in support staff.

“You never like going backwards but I’m pretty happy with the performance,” managing partner Declan Black told The Irish Times. “If you had told me in April or May of last year that this would be the outturn I would have taken your hand off. It was an extraordinary ride.”

Mr Black said he was “pretty optimistic” about the outlook for 2021 given the vaccine rollout, the Brexit trade agreement and Joe Biden’s inauguration as US president.

Transactional activity picked up sharply in fourth quarter of last year, he added. “But it’s going to be a rough ride for a little period.”

In terms of its technology team, Mason Hayes acted for Facebook in the Schrems II case before the Court of Justice of the EU regarding the transfer of personal data from Europe to the US.

It also advised Virgin Media Television on seeking an injunction to restrain Eir from infringing copyright by using its TV channels on its Apple TV product.

In its financial services practice it was lead adviser to Permanent TSB for its non-performing loan deleveraging programme, and on the sale of a portfolio of €1.4 billion of performing buy-to-let loans known as Project Glenbeigh II.

In energy it acted for Norwegian State utility company Statkraft – Europe’s largest generator of renewable energy – on the acquisition of a portfolio of wind farms and a separate portfolio of solar projects here.

In other activity it acted for US retail estate investment group Kennedy Wilson on the sale of the Portmarnock Hotel and Golf Links to the Northland Properties Group, and advised Ires Reit on aspects of its recent private placement of notes of €200 million.