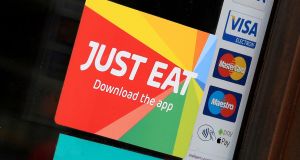 The Dutch-based technology group’s new cash offer of 740 pence per share, up from 710 pence, is about 5 per cent higher than Takeaway’s all-share bid, which has the backing of Just Eat.

“Unlike the Takeaway.com offer, which relies on [its] shares remaining at an above-sector multiple, our cash offer provides certainty of value to Just Eat shareholders,” chief executive Bob van Dijk said in a statement.

Prosus also lowered its acceptance threshold to 50 per cent plus one share, down from 75 per cent, and extended its offer period to December 27th. It said the new offer is about 25 per cent above the level where Just Eat shares were trading before its first bid in October.

Just Eat said its board was reviewing the latest Prosus offer.

Both sides are due to report on how many shares their offers have won by December 12th. If neither has emerged as winner, Britain’s Takeover Panel will start an auction process from December 27th. – Reuters