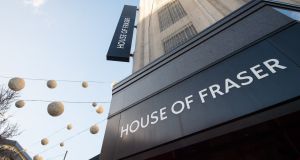 House of Fraser is fighting for its survival after the Hong Kong-listed company that also owns toy shop Hamleys abandoned plans to rescue one of the UK’s oldest and more storied retail chains.

C banner, a Chinese fashion group, said on Wednesday it was “impracticable and inadvisable” to proceed with acquiring a controlling stake in the department store, which would have given the company a £70 million (€79 million) lifeline, because of a collapse of its own share price over the past month.

House of Fraser, which was founded as a Glasgow draper in 1849, said in a statement it was “in discussions with alternative investors and is exploring options to obtain the required investment on the same timetable”, but did not provide additional details on who might step in to provide a cash infusion.

The crisis at House of Fraser, which employs about 5,000 staff, is the latest blow to a UK high street which has seen hundreds of shops boarded up and thousands of employees sacked as retailers struggle with shaky consumer confidence, the growth of online shopping and higher bills.

House of Fraser operates two Irish stores: one in Dundrum Town Centre in Dublin and a second in Victoria Square in Belfast.

Electronics chain Maplin, budget retailer Poundworld and Toys R Us all have collapsed into administration this year, while a wide range of high-street mainstays – including children’s retailer Mothercare, the fast-fashion chain New Look and Carpetright – have been forced to close stores after striking company voluntary agreements (CVA), giving them protection from creditors while they reorganise.

The retail downturn has been particularly grim for big department store chains. In June alone, Debenhams issued its third profits warning of the year, citing “exceptionally difficult times in UK retail”; John Lewis issued its own profit warning; and Marks & Spencer said it was withholding director bonuses because of poor financial results.

House of Fraser has been badly hit by a drop in high street-shopping visits as more people buy online and is weighed down by its property commitments. Its creditors in June approved a recovery plan involving the closure of 31 of its 59 stores under a CVA that would see a sharp fall in its rent costs.

The CVA was a condition of the proposed sale of a 51 per cent stake in the group to C banner by Nanjing Xinjiekou Department Store, House of Fraser’s Chinese owner. C banner was to have acquired 34 per cent of House of Fraser for £71.6 million and subscribe to £70 million of new House of Fraser Group shares, giving it a total stake of 51 per cent.

But the rating agency Moody’s this week determined House of Fraser was in technical default on its loans. It has also said that if the company was unable to complete a successful refinancing, “recovery rates for the outstanding debt would be less than 90 per cent on average across the different debt instruments”.

The CVA also faced a legal challenge by a group of landlords last month who argued that their interests had been “disproportionately affected during this CVA process”. – Copyright The Financial Times Limited 2018