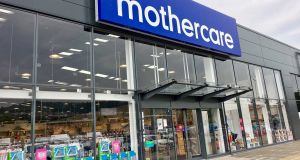 Struggling baby products retailer Mothercare reported a 8.4 per cent drop in half-year worldwide sales on Tuesday, hit by past troubles at its UK operations and tough macroeconomic conditions in the Middle East and China.

The company, which operates 1,010 overseas franchise stores, is dealing with stiff competition from online retailers and rising costs, leading to the collapse of its UK operations last month.

“We believe that without the financial and management burden of running a UK retail operation we can singularly focus Mothercare on its global international franchise,” said chief executive Mark Newton-Jones.

Yet volatility in its key international markets, including India, Indonesia and Russia, and supply disruptions from closure of UK stores could result into deteriorating trading performance, leading Mothercare to warn that there was “material uncertainty” in its ability to continue as a going concern.

However, adjusted pretax loss shrank to £5.8 million in the half-year, from £10.5 million reported a year earlier.

1 Opioid executive admits to ‘no morals’ ahead of prison term
2 Are there annual limits on inheritances or gifts to a child?
3 American YouTubers embrace the crisp sandwich
4 Fallon & Byrne founders McHugh and Byrne exit group
5 Farmer seeks to challenge €3.6bn Intel plan in High Court
6 Who are Ireland’s 17 billionaires?
7 NI businesses fear burden of post-Brexit red tape on goods transport
8 Council tells Johnny Ronan firm to keep the noise down at D4 Embassy venue
9 My father in a nursing home wants to gift me his house
10 Cathay Pacific to resume Dublin-Hong Kong flights in March
Real news has value SUBSCRIBE