Hairdressers warned against price fixing as they reopen for business 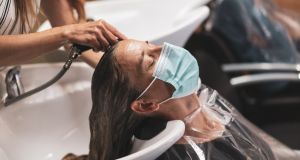 The CCPC recently wrote to hairdressing associations to warn them of their obligations under competition law. Photograph: Getty Images

Businesses reopening after the Covid-19 crisis have been warned against any attempts to fix prices at an industry level as they look to recover costs.

The Competition and Consumer Protection Commission (CCPC) said it had written to both the Irish Hairdressers Federation (IHF) and the Hairdressing Council of Ireland in recent days after the bodies publicly suggested their members might act unilaterally to introduce additional fees and hike prices.

The CCPC said it had been in contact with both hairdressing bodies recently to remind them of their obligations under competition law.

The Hairdressing Council of Ireland recently advised that many hair salons will introduce “Covid charges” or a small percentage increase of between €5 and €10. The IHF also warned of a rise in prices, primarily to cover the cost of personal protective equipment (PPE).

It came as Peter Mark, which operates 69 stores in the Republic, caused outrage when it indicated it would be hiking prices by up to €60 in some instances to fix bad home dyes and deal with long hair growth.

The regulator, which said it had received a positive response from both bodies, said that, despite the economic challenges faced by many businesses, they must continue to act independently in considering changes to pricing.

“Trade associations are free to advise their members on how to address the challenges they are facing. However, the practice of trade associations suggesting future prices, or co-ordinating ways of passing on costs to consumers, could constitute an infringement of competition law,” it said.

The CCPC also reminded businesses of the need to inform consumers of any changes to pricing or the adding of new charges.

“Whilst the vast majority of businesses act in good faith and do not seek to take unfair advantage, in these challenging times, there is a heightened risk that a small minority of traders may engage in commercial practices which are damaging to consumers,” CCPC chairwoman Isolde Goggin said.

The IHF stressed that it is a group of small businesses whose main preoccupation is to be able to return to work safely.

It said it had worked closely with other trade associations in the hair and beauty sector with the sole objective of developing strict guidelines to ensure the safety of staff and clients.

“While the Irish Hairdressers Federation has issued strict and extensive guidelines on reopening safely, it is not our role to make any recommendations on prices as this is a matter for each individual salon owner to decide,” a spokesman said.