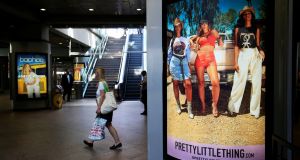 UK online fashion retailer Boohoo, which is led by Irishman John Lyttle, said it expected revenues to grow by 25 per cent in the current financial year after adding Oasis and Warehouse to its stable of brands.

It said it would pay £5.25 million (€5.85m) for the online businesses and all associated intellectual property of the two brands from Hilco Capital, which acquired them out of administration in April.

Oasis and Warehouse were formerly part of the same group as Karen Millen, a more upmarket brand that Boohoo acquired, also out of administration, last year.

The company said it would integrate Oasis and Warehouse with its own ecommerce platform “allowing both brands to benefit from the group’s insight, infrastructure, supply chain and operating model”.

In the year to February 2020, the brands generated direct online revenues of £46.8million.

The acquisition came as Boohoo said it expected revenue growth for the current year to be around 25 per cent, making it one of the first British general retailers to reinstate financial guidance during the Covid-19 pandemic.

This is below the previous year’s 44 per cent, but is a stark contrast to the declines that analysts expect at other major fashion retailers.

Margins before interest, tax, depreciation and amortisation are expected to be between 9.5 per cent and 10 per cent, similar to previous years.

It said it expects “an ongoing period of consumer uncertainty, likely promotional intensity in markets in which we operate” and higher distribution costs to some of the markets it serves. Boohoo distributes to all markets worldwide from two warehouses in the UK.

It added that it factors in capital spending of £60-80 million, and “anticipated investments into new and recently acquired brands through the course of the financial year”.

Offaly man John Lyttle, who was previously chief operating officer of Irish fast-fashion chain Penneys/Primark, took over as chief executive of BooHoo last year and has quickly made his mark on the company.

In May, Boohoo raised just under £200 million to allow it to respond quickly to opportunities that it expected would arise during the pandemic. Later the same month it said it would acquire the remaining 34 per cent of PrettyLittleThing that is owned by Umar Kamani, one of Boohoo founder Mahmud Kamani’s sons.

The group said it “continues to appraise opportunities, and will update shareholders in due course”.

In the three months to end-May, group revenue grew 45 per cent to £368 million. The period includes a few weeks before the UK’s lockdown started and revenue contributions from Karen Millen and Miss Pap, both of which were acquired last year.

Jefferies analyst Andrew Wade said that in previous statements the group had hinted at sales growth of over 20 per cent, but that “restrained language and sell-side caution” meant the market had expected only 15 per cent during the first quarter.

“The result clearly demonstrates the virtues of Boohoo’s nimble model – leveraging its flexible supply chain and rapidly evolving both marketing content and product ranges,” he said in a note to clients.

Boohoo, which also owns the Nasty Gal and PrettyLittleThing brands, has become a hit with a generation of younger consumers who shop on their mobile phones and share fashion tips on social media.

Spending among Boohoo’s young female customer base has proved resilient, and the company has been quick to pivot from holiday and “going-out” wear to the leggings, sweatshirts and athleisure wear that customers have been wearing during lockdown.

Sales grew by 65 per cent in Europe outside the UK and by 83 per cent in the US, while UK revenue was up 30 per cent. – Copyright The Financial Times Limited 2020/Reuters