Irish shoppers continued to stockpile as lockdown came to a close 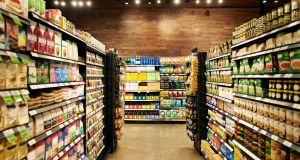 Shoppers spent an extra €628.7m on groceries in the 12 weeks to June 14th than in the same period last year

The habit of stockpiling groceries doesn’t appear to have fallen away with Irish shoppers spending almost 25 per cent more in the 12 weeks to June 14th than they did last year, data from retail analysts Kantar shows.

In the three month period, shoppers spent an additional €628.7 million on groceries than in the same period last year as people made “fewer, larger trips to the supermarket”, Kantar retail analyst Emer Healy said.

Although, the number of shopping trips taken by consumers rose 2.3 per cent in the last four weeks of the survey compared to the previous eight weeks. Shoppers are still spending more in normal times with the average person spending €204 extra this June compared to last year.

“There are indications of cautious optimism in Ireland. Despite the months of lockdown, 40 per cent of Irish consumers say they feel financially comfortable and that’s reflected in how they are shopping.

“With some of the usual ways to treat themselves off limits, they’re trading up to branded goods in store, spending an additional €381 million on these products compared with last year,” Ms Healy said.

The demand for grocery delivery has also risen with an additional 99,000 households receiving a delivery in the past 12 weeks. An extra €70.9 million was spent during the past 12 weeks, a 114 per cent increase on the same period last year.

As for what people are buying, alcohol remained popular as did products for a fry up. Take home alcohol sales rose 93 per cent in the last four weeks of the survey compared to the previous eight weeks. And sales of bacon rose 25 per cent, eggs rose 36 per cent and sausages were up by 35 per cent year on year.

There was also a tendency from consumers to buy goods they’d usually find in a restaurant. Sales of ingredients such as curry pastes, coconut milk and Mexican meal kits were up 34 per cent in the period compared to the same time last year. Goods associated with socialising and picnics also received a boost in sales with dips up 25 per cent, soft drinks up 42 per cent and crisps up 52 per cent.

Ms Healy also noted that Irish shoppers are shopping locally. “Over 40 per cent of Irish shoppers are now shopping closer to home and independent outlets are benefiting from this - growing sales by 44.8 per cent during the 12-week period. People are depending on local suppliers more and they spent an additional €2.4 million at greengrocers and €11 million at butchers compared with the same period last year,” she said.

Kantar, which monitors the household purchasing habits of 5,000 demographically representative households, also said that inflation in the grocery sector was 2.8 per cent over the 12 week period.

10 Stocktake: Is it wise to buy absurdly expensive stocks?