H&M surges as progress made on inventory build up 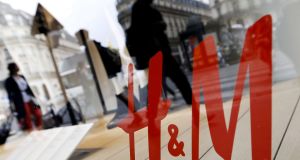 People walk past the window of a H&M store in Paris. Photograph: Regis Duvignau/File Photo/Reuters

H&M surged after the struggling Swedish clothing retailer showed some progress coping with an inventory buildup, raising hopes that the worst may be over.

The value of unsold garments dropped slightly as a proportion of sales, reaching 18.2 per cent at the end of May, down from a record 18.9 per cent as of last August. The stock rose as much as 10 per cent Thursday morning in Stockholm.

The retailer has been struggling as unsold garments have accumulated over the past three years amid a series of fashion mistakes. The stock can be volatile because short sellers have targeted it, betting against almost a fifth of the freely traded shares.

H&M lowered its net store-opening target for this year by 26 per cent to 130, slowing down some more after adding more than 400 in recent years. The move will allow the retailer to boost investment in online expansion, H&M said.

HandM has been plowing investment into e-commerce, adding online sales in Mexico, Thailand, Indonesia and Egypt this year.

HandM said that while inventory is higher, the unsold garments will be easier to sell as the composition is improving. The retailer forecast a fourth consecutive quarter of lower markdowns.

Amid other good news, HandM’s sales rose 12 per cent in June, the first month of the third quarter. That’s double the rate of the second quarter, when a rainy and cold spring weighed on European clothing demand, hurting retailers including Inditex SA. – Bloomberg