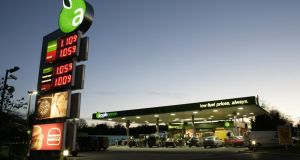 Before Wednesday, Applegreen had 121 sites in the US.

Forecourt retailer Applegreen has agreed to rent 46 service stations on an initial 10-year agreement in the US.

The Dublin-listed group agreed to acquire a leasehold interest in the sites concentrated around the Minneapolis and St Paul metropolitan area in the US state of Minnesota.

No up-front cost will be paid by Applegreen which said that the transaction would boost earnings this year. It added that the 10-year agreement included extension options “negotiated in order to allow for a low-risk expansion of Applegreen’s presence in the USA”.

New York-listed CrossAmerica Partners (CAP) and Lehigh Gas Partners are two of the lessors of the 46 sites while all comprise petrol filling stations including convenience store operations.

Applegreen’s existing US management team will manage the operation.

“We consider this group of sites to be a good fit for our business given the convenience of its locations centred on the large metropolitan area of Minneapolis-St Paul and we are happy to expand on our existing relationship with CAP in the USA,” said Applegreen chief executive Bob Etchingham.

The transaction is expected to complete by the third quarter of this year.

At its annual general meeting at the start of June Applegreen said it was not ruling out selling 29 hotels it acquired when it bought British rival Welcome Break for €360 million.

Chief executive Bob Etchingham said at the time the company would decide on the hotels’ future when it completed a review of the properties this year.

“There are a whole range of options that may emerge, from staying as they are right across the board to the other extreme, which would be a disposal,” he added.

The hotels, run by Ramada or Days Inns, are located at Welcome Break’s motorway petrol stations in Britain.

Applegreen’s chief operating officer, Joseph Barrett, pointed out that they were valuable to the Irish company and indicated that the group was more likely to keep them.

The €360 million deal surprised markets when Applegreen announced it.

1 Council tells Johnny Ronan firm to keep the noise down at D4 Embassy venue
2 How to . . . keep your kids safe playing Fortnite
3 Who are Ireland’s 17 billionaires?
4 How to . . . move (almost) everything to your new phone
5 Are there annual limits on inheritances or gifts to a child?
6 RTÉ’s multiple lobbying meetings with politicians
7 ‘We get on with things despite the politicians’
8 If you have any assets overseas you need to read this
9 Can I get my ex-partner’s name off my mortgage?
10 Q&A: What the motor tax changes could mean for you
Real news has value SUBSCRIBE