From Telecom Éireann to Eircom to Eir: a timeline 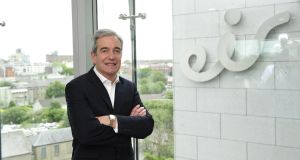 December 1983: Bord Telecom Éireann is formally established with the objectives of meeting the “industrial, commercial, social and household needs of the state for comprehensive and efficient telecommunications services”. It remains a state-owned company until 1999.

December 1998: Minister for public enterprise Mary O’Rourke announces that the government has approved publication of the Postal and Telecommunications (Amendment) Bill, 1998, paving the way for the flotation of Telecom Éireann.

July 8th, 1999: Shares in Telecom Éireann begin trading on the Dublin, London and New York stock markets having floated at £3.07. Some 574,000 small investors buy into the stock.

October 2000: The company, now known as Eircom, confirms it is in talks to sell its mobile phone business, Eircell, to Vodafone.

May 2001: Shareholders vote to split up the company, allowing for the sale of Eircell. In the same month, it becomes clear that bidders for the remainder of the business include Sir Anthony O’Reilly, Denis O’Brien and Dermot Desmond.

November 2001: Sir Anthony O’Reilly and the Valentia Consortium are successful with their bid for Eircom after getting approval from tánaiste Mary Harney. The company is delisted from the Dublin and London stock markets. Eircom becomes a company limited by shares and O’Reilly becomes its chairman.

March 19th, 2004: Eircom returns to the Irish stock market with a valuation of €1.1 billion. It is the largest flotation in Dublin since the firm last joined the stock market in 1999. The company begins trading at €1.55 per share.

July 25th, 2005: Eircom announces that it is buying mobile business Meteor for €420 million after a bidding process that again saw Sir Anthony O’Reilly and Denis O’Brien face off for control of a company.

May 2006: Australian firm Babcock & Brown tables a bid of €2.8 billion for Eircom. The board backs the bid and the deal is swiftly completed. By the middle of August, Eircom is once again delisted from the Irish stock exchange.

December 2009: After Babcock & Brown goes bust, Singapore-based STT tables a bid for Eircom which is ultimately accepted. The company takes over Eircom for €140 million.

March 2012: Having struggled to restructure its €4.1 billion gross debt, Eircom enters examinership. It is expected that roughly €1.8 billion will be written off. In June, the company exits examinership with new capital and shareholders in place. STT is no longer involved and investment firm Blackstone becomes the largest single shareholder.

September 2015: It’s goodbye to Eircom and hello to Eir. The troubled telecommunications company rebrands into the business it is today as Blackstone sells its stake to hedge fund Anchorage Capital.

1 Why are markets booming when a crash is on the way?
2 Permission sought for €150m film and media campus in Wicklow
3 Your old car could be telling others all your personal data
4 Government committed to finalising roadmap for safe overseas travel ‘shortly’
5 Drink tax row; no respite for Bewley’s; and mortgage U-turn at AIB
6 Covid-19: Publicans and restaurateurs row over calls for VAT cuts
7 AIB U-turn on mortgage block for those on Covid wage subsidy
8 Vodafone to speed up 5G rollout using DSS technology
9 Pfizer and BioNTech’s Covid-19 vaccine trial yields positive results
10 Ryanair still planning 3,000 job cuts
Real news has value SUBSCRIBE