More than half of Irish charities fail to disclose income sources 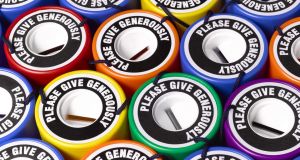 Thirty-six per cent of Irish charities break down expenditure by activity in their reports, compared with 76 per cent in the UK, a report commissioned by Chartered Accountants Ireland has found. Photograph: Peter Dazeley/Getty Images

Irish charities lag significantly behind the UK in terms of reporting financial information, with fewer than half of organisations in this country disclosing income by source, according to a new study.

That compares with 88 per cent of charities in the UK, according to the report, commissioned by Chartered Accountants Ireland and which follows an analysis of 25 trustees’ annual reports from both the Irish and UK charity sectors.

“The study demonstrates the need for the new Charities Regulatory Authority to improve the accountability and transparency of the sector,” said Chartered Accountants Ireland president Shauna Greely.

“The trust and confidence of the public are crucial for ensuring the health and growth of the charity sector. After all that has happened with the sector in recent years, it is of the utmost importance that every step is taken to protect this trust.”

News in 2013 of a €741,000 severance package given to the former Central Remedial Clinic chief executive Paul Kiely and the departure of Rehab Group chief executive Angela Kerins the following year after some heated appearances before the Dáil’s Public Accounts Committee have been cited as having had an impact on the fundraising efforts of other charities, the report says.

More recently, the collapse of suicide-prevention charity Console made headlines last summer when it emerged that senior figures, including its founder Paul Kelly, had run up credit-card bills of almost €500,000 on items such as groceries, designer clothes and foreign trips between 2012 and 2014.

The Chartered Accountants Ireland-commissioned report, carried out by Ciaran Connolly, Noel Hyndman and Mariannunziata Liguori, noted that while certain reporting procedures have become mandatory for most UK charities, they remain only “best practice” for Irish charities. This may be partly down to the fact that the Irish regulator was established only in late 2014, compared with the UK, where there has been a regulator since the 19th century.

“The publication of performance information, in cases where a charity has operated efficiently and effectively, may well make it more attractive to donors,” said the report’s authors, all from Queen’s University Belfast.