Arnotts had one million visitors and Brown Thomas 650,000 in month of December 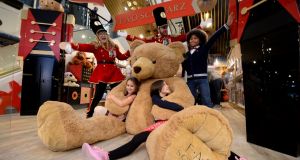 Enjoying the opening of the FOA Schwarz Toy store at Arnotts: Some 6,500 families visited Santa in Arnotts, a record for the store. Photograph: Alan Betson

Arnotts and Brown Thomas recorded a 7 per cent increase in sales over the Christmas period, with footfall in both department stores increasing over the festive season.

Some one million people visited Arnotts across the month of December, a year-on-year rise of 6 per cent, with 650,000 passing through the doors of Brown Thomas’s flagship store on Grafton Street, representing an increase of 1 per cent.

Online sales across the two retail brands rose by 60 per cent year on year, while the number of people buying both instore and online increased by 25 per cent.

“This included everything from marching bands through the store, and a Christmas-themed cafe – to the recreation of afternoon tea on the Orient Express.”

Some 6,500 families visited Santa in Arnotts, a record for the store. This generated a sum of €50,000 that was donated to the St Vincent de Paul charity.

Mr McDonald said beauty, technology, menswear, and women’s accessories were the best performers for Brown Thomas. There was “huge interest” in its seasonal Marvel Room, he added, with its mini arcade machines and go-karts proving popular.

The positive Christmas trading period for Brown Thomas and Arnotts was in contrast to the experience of UK retailers. Official data published on Friday showed that British consumers failed to increase their spending in December for a record fifth month in a row.

Monthly sales volumes fell by 0.6 per cent from November, defying the median forecast for a rise of 0.5 per cent in a Reuters poll of economists. Sales in monthly terms have not risen since July, the longest such run since records began in 1996, the Office for National Statistics said. – Additional reporting: Reuters