Price index for export sales drops by 0.1% while index for home sales increases by 0.9% 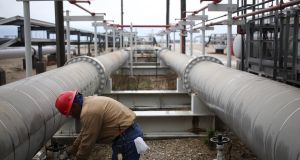 The price of petroleum fuels increased by 11 per cent in the year since March 2016. Photograph: Luke Sharrett/Bloomberg

The price of goods leaving factory gates were static in March compared to the previous month, but increased by 2.1 per cent in the 12 months to the end of March, according to figures released yesterday by the Central Statistics Office (CSO).

Export sales in March excluding mining and quarrying decreased by 0.1 per cent on the previous month. However, there was a year on year increase of 1.5 per cent in the price index for export sales which, the CSO suggest, can be influenced by currency fluctuations.

The most significant monthly changes to the wholesale price index were increases in dairy products, which climbed by 3.3 per cent in March, meat products, which saw an increase of 1.4 per cent, and fabricated metal products, except machinery and equipment, reporting growth of 0.7 per cent.

The most negative effect on the index was caused by price decreases in computer, electronic and optical products, reporting a fall of 0.5 per cent, and bread and confectionary products, which dropped by 0.3 per cent.

The annual price increase of 2.1 per cent was caused by a slightly different set of factors. Dairy prices went up in the 12 months to March 2017 by 13.9 per cent, so too did food products including bread and confectionery which noted an increase of 4.9 per cent.

Weighing on the yearly change in the index were printing and reproduction of recorded media, which dropped by 6.1 per cent, and grain milling, starches and animal feeds, declining by 3.5 per cent on the year.

The price index for home sales in March went up by 0.9 per cent compared with February. On the year, home sale prices increased by 6.4 per cent.

Materials prices increased by 3.9 per cent in the 12 months to the end of March 2017. The monthly change was more modest, coming in at 1.3 per cent.

The most notable yearly changes were increases in glass prices by 21.7 per cent, sand and gravel by 18.4 per cent, and stone by 10.5 per cent. Modest decreases were recorded in other concrete products, which fell by 1.5 per cent, and structural steel, which dropped marginally by 0.2 per cent.

The wholesale price index for building and construction materials covers home production and imports of these commodities.

However, it only provides a general indication of price trends in the sector according to the CSO. Actual transaction prices are collected for materials purchased by construction and civil engineering firms throughout the country and the index reflects an average over a mixture of products.

1 ‘I don’t need to do any of this. . .I don’t actually need to work.’
2 Anti-alcohol zeal of public health experts peppers reopening debate
3 Admission of mistake in Oxford vaccine dose raises doubts over reliability
4 Same Brexit stumbling blocks persist as Barnier travels to London
5 White knights or loan book cannibals – what will happen at Ulster Bank?
6 Pandemic brings a halt to Zara-owner’s Irish expansion
7 Move to EU or face disruption, City of London is warned
8 Deutsche Bank’s head of accounting under investigation over Wirecard
9 Oxford-AstraZeneca vaccine may be trialled again to prove results were ‘not a mistake’
10 Cliff Taylor: Deal or no deal we are now heading for a hard Brexit
Real news has value SUBSCRIBE