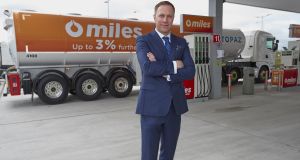 Topaz is investing €6 million in the roll-out of a new fuel brand, Miles, across its 430 Irish petrol stations.

Miles is the fuel brand owned by Canadian group Alimentation Couche-Tard, which acquired Topaz in a deal which closed in February 2016.

Couche-Tard has been introducing the Miles petrol and diesel brand at its stations across Europe in recent years. The company said additives in its fuel reduces consumption by up to 3 per cent as well as lowering maintenance costs for motorists.

The €6 million covers investment in new pumps and forecourt renovation and branding as well as advertising and marketing costs.

Alimentation Couche-Tard, which operates more than 15,000 outlets worldwide, paid €258 million in cash to Denis O’Brien for Topaz as well as taking on debt in a transaction that was reported at the time to be worth in the region of €450 million.

Mr O’Brien had bought the debts of Topaz for €150 million from Irish Bank Resolution Corporation (IBRC), the former Anglo Irish Bank, and paid a further €75 million for Esso’s Irish assets just before the Couche-Tard sale.