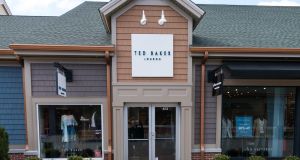 Ted Baker’s troubles deepened on Tuesday with the sudden exit of the British fashion retailer’s chief executive and chairman as it issued another profit warning and suspended its dividend, sending its shares tumbling to a 16-year low.

The problems cap a tumultuous year for Ted Baker after misconduct allegations against Ray Kelvin, its founding former chief executive and top shareholder, which he has denied.

Like other British retailers, Ted Baker has been hit by weak consumer demand and last week pressure mounted on its management team when it said it may have overstated inventory by as much as £25 million (€29.7 million).

“Ted Baker is truly having the nightmare before Christmas,” AJ Bell investment director Russ Mould said as the share price fell by as much as 35 per cent, taking its losses for the year to 78 per cent.

Ted Baker said Lindsay Page, who had been with the company for more than two decades but only became chief executive eight months ago, was leaving along with its chairman David Bernstein.

Mr Page’s promotion in April had been seen as a turning point for Ted Baker, which has been trying to move on from the bad publicity prompted by Mr Kelvin’s habit of hugging colleagues with a company-wide push to foster a change in corporate culture.

‘Coming apart at the seams’

The latest profit warning and the suspension of its dividend raised immediate questions about how Ted Baker, which said it had appointed independent consultants to review its costs and business model, would now get back on track.

“This is a train wreck of an update, and it feels like the company is coming apart at the seams,” CMC Markets analyst David Madden said after Ted Baker cut its pre-tax profit forecast to a minimum of £5 million for 2019.

This compared with a £50.9 million profit last year.

Kelvin still has a 34.9 per cent stake in Ted Baker and there has been media speculation that he would support a private equity buyout of the business, whose first store opened in 1988 in Glasgow, Scotland.

The company, which started life as a specialist in men’s shirts, said its performance during November and the Black Friday sale period, in contrast to some other retailers, was below expectations and discounting had hit gross margins.