Bank is a shareholder and creditor of the retail group 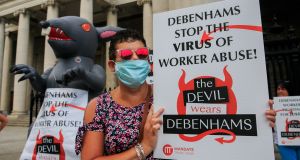 Debenhams staff protested outside a number of Bank of Ireland branches on Friday as part of their campaign to obtain redundancy pay for more than 1,000 workers. Photograph: Gareth Chaney/Collins

Debenhams workers protested on Friday outside premises owned by one of the parent company’s shareholders, Bank of Ireland.

Former workers at the company, the Irish arm of which was placed in liquidation in April, are seeking to win redundancy pay.

Debenhams Retail Ireland had operated 11 stores in the Republic and had employed 950 people directly. An additional 500 people had worked at the 26 concession stands operated by other retailers located in Debenhams stores.

The company’s creditor group includes Barclays and Bank of Ireland Group, along with hedge funds Alcentra and Silver Point Capital. Bank of Ireland has a 5 per cent shareholding in the company having been a former lender.

The trade union Mandate suggested the retailer had “transferred valuable assets out of the country” before seeking liquidation, something it said limited the chance of workers obtaining redundancy payments from the company.

“These loyal workers, year on year, helped to generate significant profits for the Debenhams owners and it is morally incumbent upon the Bank of Ireland to act now in a responsible and positive manner to help these workers achieve a fair and reasonable resolution to this dispute,” Mandate’s national co-ordinator for campaigns, Brian Forbes, said.

While the union didn’t say exactly what it expected of the bank, it cited the fact that it is 14 per cent owned by the State as a reason why it should intervene.

“We understand the challenges facing all sectors, employers and workers at the moment,” a Bank of Ireland spokesman said. “As a long-term lender to Debenhams, we were very disappointed that they had to suspend trading in Republic of Ireland stores.

“Bank of Ireland is a minority lender to the Debenhams group, and holds a small (circa 5 per cent) shareholding in the company. This was acquired as part of a debt restructuring in 2019 where the bank extended further lending to Debenhams in an effort to support its viability.”

Evidence put before the High Court when a liquidator was appointed suggested that the Irish arm of Debenhams had been in financial difficulties “for some time”, and before the outbreak of the Covid-19 pandemic. It incurred losses of more than €40 million in 2018 and 2019, and was being “propped up” by its UK parent, Mr Justice Mark Sanfey said in April.

The “last straw” for the Irish firm came when the UK parent, which also had suffered financial difficulties and has entered administration for the second time in two years, decided to end its financial support.

The Irish firm’s creditors include Revenue, which is owed €3.8 million, the High Court was told in April; the landlords of the premises they had operated from; trade creditors; other firms within the group; and its employees.