First quarter trading update shows overall sales in Britain and Ireland are up 9.2% 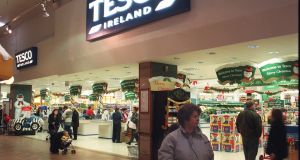 Tesco said growth in its Irish convenience stores amounted to 11.8 per cent.

A significant boom in online sales among Irish customers helped drive Tesco sales in Britain and Ireland up 9.2 per cent in the first quarter of its financial year.

In a trading update for the quarter ended May 30th, 2020, published on Friday, Tesco said online sales in the Republic were up 50.9 per cent, while growth in Irish convenience stores amounted to 11.8 per cent.

While shopping frequency was down 32 per cent, customers bought substantially more when they did shop, with basket size increasing by 64 per cent.

Tesco said the launch of its “Aldi price match” in March led to net switching gains to Tesco from Aldi for the first time in over a decade. The company said it would extend the scheme to almost 500 Tesco and branded products.

Tesco said it saw major shifts in product and category mix as customers focused more of their purchases on essential items.

At the company’s annual shareholder meeting on Friday, over 67 per cent of investors took issue with remuneration at the company. The shareholders voted against the pay report granting outgoing chief executive Dave Lewis £6.4 million in total compensation.

The non-binding shareholder vote is only advisory, so it will not derail the payments to Mr Lewis.

Meanwhile, in the UK, food sales grew 12 per cent at the company, whereas more discretionary categories such as clothing saw sales declines of 20 per cent. Fuel sales, which are excluded from the headline sales performance, declined by 50 per cent.

Following a sharp initial reduction, sales in general merchandise recovered through the quarter with some categories – toys, home, stationary and electrical – growing strongly year-on-year, as customers increasingly looked to add these items to their weekly shop.

Responding to the significantly increased demand for online shopping, Tesco has doubled its online capacity and is now fulfilling over 1.3 million orders per week.

Across the quarter as a whole, it delivered 12.6 million orders, including to a priority list of 590,000 vulnerable customers.

In addition to providing more delivery slots for customers, it said it also increased the availability of its click and collect service, which now represents around a quarter of online orders.

As a result, its online grocery business has grown from 9 per cent to more than 16 per cent of its total UK sales.

On Covid-19, Tesco said it has had to make significant changes to its operations which have led to a substantial increase in costs, with the main impact in the UK.

The majority of these costs relate to payroll which includes the provision of twelve weeks paid leave to 26,000 “vulnerable colleagues”, in addition to the recruitment of 47,000 temporary colleagues to cover absence and meet increased demand.

“The provision of safety-related consumables and personal protective equipment across all of our 3,628 stores in itself results in a charge of £65 million.

“In total, our latest estimate of incremental costs for the UK for the full year is £840 million. These costs will be partially mitigated by the UK business rates relief of £532 million and a contribution from additional food sales.”

In relation to outlook, the company said its current expectation is that retail operating profit in the current year is likely to be at a similar level to 2019/20 on a continuing operations basis.

However, it has increased its provision for potential bad debts at Tesco Bank and now expects to report a loss for the bank of between £175-200 million for the 2020/21 financial year.

Whilst headline profitability is impacted in the short term, the bank’s capital ratios and liquidity “remain strong”.