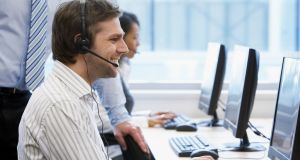 A proposed $2.4 billion corporate acquisition in the United States by Synnex could be create the North’s largest call centre operator, according to senior industry sources.

Synnex wants to acquire California-based Convergys – the call centre operator that employs more than 2,100 people in the North across three sites – and merge it with its subsidiary Concentrix, which also employs nearly 1,500 people in Belfast.

The $2.43 billion cash and stock deal, which is expected to close by the end of this year, could create one of the largest private sector employers in the North, with a workforce of potentially 3,600 people.

In comparison, aerospace giant Bombardier employs about 4,500 workers in Northern Ireland while Almac employs 2,650 people at its Craigavon headquarters.

Concentrix is already one of Northern Ireland’s key contact centre operators. It first came to the North in 2011 via the acquisition of GEM, a customer call centre that had been set up by a group of Northern Irish entrepreneurs.

Senior US industry sources believe the proposed acquisition of Convergys would be “positive” for Northern Ireland’s Concentrix workforce because it will “enhance” the overall Concentrix operation in Europe by expanding its client base and creating “new opportunities to grow”.

The $26.50 per share offer represents a premium of 4.5 per cent to Convergys’s close ahead of the news.

1 Will family’s tax debt stop me getting my inheritance?
2 What is Covid Tracker Ireland?
3 British holiday home rental company exits Irish market
4 Why gift a son now if it eats into his tax-free inheritance threshold?
5 How to save money while helping to save the planet
6 UK holiday group quits Ireland, ESRI on child poverty, and SME stimulus
7 Mortgage arrears: Prevention is definitely better than cure
8 Can we finally say farewell to the scourge of hot-desking?
9 Big Four told to outline plans for audit split in UK by October
10 Pension funds play loser’s game in alternative assets
Real news has value SUBSCRIBE