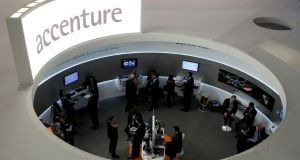 Accenture’s third-quarter revenue and profit came in above Wall Street estimates on Thursday as the consulting and outsourcing services provider benefited from its plan to boost investments in digital and cloud services.

Revenue from its digital, cloud and security-related services, which the company terms as “the New”, made up about 60 per cent of total revenue.

Accenture has spent more than $3 billion (€2.59 billion) over the last three years on some 70 acquisitions to boost its digital and cloud services in order to compete better with Cognizant and IBM.

The company forecast current-quarter revenue between $9.8 billion (€8.4 billion) and $10.05 billion (€8.6 billion), the midpoint of which was slightly below average analyst estimate of $10.01 billion, according to Thomson Reuters.

1 Why are markets booming when a crash is on the way?
2 How much do Irish people earn? And what will Covid-19 do to our wages?
3 Government deficit balloons to €5.3bn on back of Covid spending
4 Drumcondra credit union collapses as merger plan fails
5 Could your old car be giving away all your secrets to its new owner?
6 Dunnes Stores trials online ordering from Cornelscourt outlet
7 Live Register swelled by 213,000 in June
8 Permission sought for €150m film and media campus in Wicklow
9 Irish travel-tech company Rove raises €450,000 in seed funding
10 OneProjects confirms €11m investment led by LSP and Atlantic Bridge
Real news has value SUBSCRIBE