Set up in 2006 by Dubliner Susan Walsh, the Globe Business College in Munich is fostering Irish-Bavarian business relations 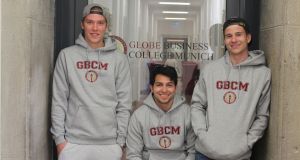 Students at the Globe Business College in Munich. While Globe attracts students from all over the world many have gone on to study in Ireland

If Ireland is serious about beefing up its post-Brexit engagement with Germany, then Munich’s Globe Business College is a good place to start.

Founded in 2006 by Dubliner Susan Walsh, the private institution housed in an art deco building has become a fixture of the business and political life of the booming Bavarian capital.

And with each passing year, it grows its cohort of business graduates who can straddle the Irish and German business traditions.

“Germans are brilliantly efficient and rational, the Irish are good at thinking on their feet, and we try to produce graduates who can do both,” said Dr Walsh.

“We try to give our international students that innate ability the Irish have, and often aren’t even aware of, to relate to people quickly and work with them.”

As well as with her enthusiastic graduates, her winning formula has clicked with students’ parents. Many are business owners from the so-called Mittelstand – the family-owned business backbone of the German economy.

Long after Michael Grodd graduated from Globe he remains actively involved, alongside his role as global sales head at telecoms giant Gigaset, with turnover of nearly €300 million in 2017.

“The image of Ireland we have in Germany is of a modern, agile ... digital and optimistic place,” he said, “and Globe College encapsulates this perfectly.”

While Globe attracts students from all over the world many, enthused by their time with Dr Walsh, have gone on to study in Ireland.

“What I liked about the Irish approach here was nurturing students, the personal touch, you don’t get that elsewhere,” he said.

But Dr Walsh and the Munich Irish remain convinced Bavaria will be a fertile ground to put into practice a new bilateral strategic partnership report.

As well as educating students from dozens of countries, Globe College offers “Golden Tickets” to Irish students: allowing them visit Munich in the summer and get a taste of life and education in the Bavarian capital.

“This isn’t an Irish college, it’s an international college embedded in the German system but with an Irish touch,” said Dr Walsh.

“The Irish have this power and ability to get things done with people,” said Dr Horst Mahr, director of Bavaria’s Foreign Affairs Association. “And Dr Walsh is one reason why Irish-Bavarian relations develop in such a positive way.”

1 Flights abroad ban could last all summer
2 Economic self-harm is at the root of populism
3 Brexit: System agreed for Irish goods to skip checks on UK trade
4 Why are markets booming when a crash is on the way?
5 How much do Irish people earn? And what will Covid-19 do to our wages?
6 Columbia Sportswear defies gloom with first Irish standalone shop
7 Nine more suing INM and Leslie Buckley over alleged data hacking
8 What is the truth about paying tax in Ireland?
9 Stocktake: Playing poker with the day traders
10 Indoor vertical farming is the future says Irish agritech start-up
Real news has value SUBSCRIBE