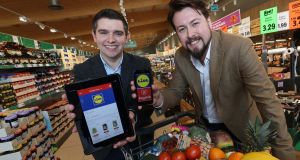 Lidl’s online grocery shopping and home delivery service, operated by app developer Buymie, is being extended into the commuter counties surrounding Dublin, following its launch in the capital earlier this year.

Buymie is backed by Unilever and Eamonn Quinn, whose late father Feargal Quinn founded Superquinn. The service is based on the so-called “gig economy” and links online customers with personal shoppers who travel to a store to buy the groceries, before delivering them in their own car for a fee.

The service was launched across much of the capital in January. Lidl on Tuesday announced that the service was now being extended into two of the largest towns in Wicklow – Bray and Greystones – and also in the Kildare towns of Maynooth and Celbridge, which are effectively suburbs of Dublin.

Buymie uses algorithm technology to match online orders with the nearest personal shopper or “picker”, operating in a similar fashion to restaurant delivery services such as Deliveroo. It is thought to be planning a UK launch of its service, perhaps later this year.

Buymie also operates an online shopping service for Tesco, which in parallel also runs its own home delivery service.

Lidl shoppers also pay a “platform fee” percentage of the basket cost to Buymie, starting at 14.75 per cent, declining to 9.75 per cent for orders above €120.