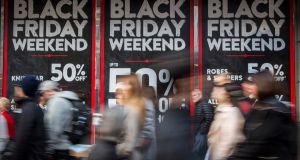 Of those who intend to do their Christmas shopping on Black Friday and Cyber Monday, about one-third will spend more than they did last year, a survey has found. Photograph: Rob Stothard/Getty Images

Despite fears that Black Friday and Cyber Monday merely displace other Christmas revenues, Irish shoppers are gearing up for a major splurge this month on the US-inspired retail promotional days, according to new research.

The study, conducted by Amárach Consulting for PricewaterhouseCoopers (PwC), suggests that about a fifth of those surveyed will do the majority of their Christmas shopping over the two days – November 23rd (Black Friday) and three days later on Cyber Monday.

Taking place in the days immediately after Thanksgiving in the US, Black Friday and, latterly, Cyber Monday, are traditional staples of the shopping season across the Atlantic that in recent years have become increasingly important to Irish retailers.

The research suggests that about 56 per cent of those surveyed are interested in doing at least some of their shopping on Black Friday or Cyber Monday, which was originally conceived as an online retailing version of Black Friday.

Of those who intend to do their Christmas shopping on those days, about one-third will spend more than they did last year. Half of them will spend up between €100 and €500, which chimes with Black Friday’s emergence as a day when consumers seek out big ticket items at discounts.

About 60 per cent of shoppers are interested in buying electronics while 69 per cent will spend on clothing and footwear, with the latter proportion markedly higher among younger people. Men are most likely to buy electronic goods.

The research also shows that 18-24-year-olds are almost five time as likely to spend on Black Friday/Cyber Monday as respondents over the age of 55. Almost two-thirds of shoppers will do their shopping online over that weekend.

Owen McFeely, the director of PwC’s retail and consumer practice, said Black Friday weekend has replaced December 8th, a Catholic feast day traditionally associated with people from outside Dublin coming to the city to shop, as the “gateway” to the Christmas shopping season.

He said Black Friday and Cyber Monday had “the potential to displace” retailers’ sales from December.

Although Black Friday/Cyber Monday is increasingly popular with Irish consumers, the majority of shoppers still expect to do the bulk of their spending in stores, however.

Industry lobby groups, such as Retail Ireland and Retail Excellence, have previously cautioned that Black Friday discounts may be cannibalising revenues that would otherwise have been received in December.

Stockbroking firm Davy said earlier this year that the US-inspired days were “playing havoc with the seasonal pattern” of Christmas shopping. Last year, sales of electrical goods rose 17 per cent in November before falling back by 18 per cent in December. Davy also suggested that much of the increased spend on big ticket items was down to “deep discounting”, as retailers compete with each other for the best Black Friday/Cyber Monday deals.

Meanwhile, Buyitdirect, one of the largest UK online retailers, has announced it is launching in the Irish market with a range of deep discounts for Black Friday, with laptops for less than €500 and 23-inch TVs for less than €120.