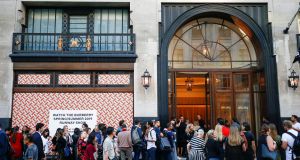 Burberry store on Regent Street, London. The brand says it will take time to turn around a business where first-half revenue and operating profit both fell. Photograph: Henry Nicholls/Reuters

Burberry’s new creative designer has had an “exceptional” response to his debut collection, but it will take time to turn around a business where first-half revenue and operating profit both fell, the luxury brand said on Thursday.

While luxury brands have benefited from a rebound in Chinese demand and interest from younger shoppers, Burberry has lagged rivals, leading to Mr Tisci’s appointment in March.

Burberry reported revenue of £1.22 billion for the 26 weeks to September 29th, down 3 per cent but ahead of analyst forecasts, and adjusted operating profit of £178 million down 4 per cent.

It said its outlook for the full year for broadly stable revenue and adjusted operating margin. – Reuters